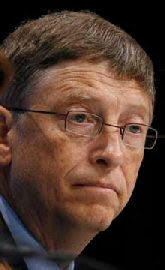 (For the benefit of the ten people on earth who don’t know this, I should point out that Vista is the name of the latest Windows PC operating system.)

This Wired article is a somewhat detailed hosanna to a certain William Henry Gates III, who is working his last day as an employee of Microsoft, the company he co-founded with Paul Allen in 1975, today (a Wired article on the Microsoft antitrust trial is here - I'll try to get through it shortly).

As we look back on the legacy of “the great man,” I would also ask that we recall how he flip-flopped on a gay rights bill significantly affecting his employees here (I wonder if paying Ralph Reed $20K a month had something to do with it?), and I also recall here how he ended up hosing a loyal Microsoft customer by releasing a product to market which, for my money (literally) is one of the most vicious pieces of malware I’ve ever seen.

And Gates has also pushed hard to lift the number of H1B visas for software professionals primarily from Asia while thousands of US-based IT professionals continue to lose their jobs (as noted here, and in a related vein, I recommend this great editorial by Thomas Frank, author of “What’s The Matter With Kansas?,” that, shockingly, appeared on the Wall Street Journal Op-Ed page today).

Update: And here's a little tribute...