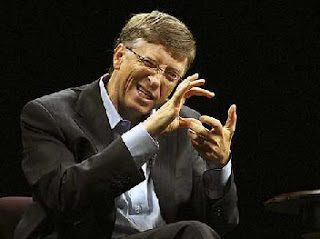 TIME Magazine gushed over Bill and Melinda Gates in 2006, naming them Persons Of The Year along with Bono of U2 in part for providing $750 million for child immunizations, awarding grants to schools in Texas, Colorado and Massachusetts, and sponsoring the Lutheran World Relief program, which received $640,000 to help nomadic communities in Niger avert food crises.

What a tragedy that Gates doesn’t have a similar humanitarian instinct when it comes to American workers.

As noted here in yesterday’s New York Times, Gates and Steven A. Ballmer of Microsoft (the company Gates founded, of course), as well as other executives, lobbied Congress to loosen H-1B visa restrictions to allow more foreign workers to enter this country under the traditional cry by employers that there is a shortage of American workers (author Linda Musthaler in her column here uses a more polite “B” word than the one I would use in response to that claim).

Actually, if Gates had his way, he would eliminate the H-1B visa program altogether (as noted here). Gee, I guess Bill doesn't see the homeland security issue there, does he?

Here is yet another column about the pain inflicted on workers who are victimized by outsourcing/offshoring/whatever corporate trend is favored this week when it comes to screwing over U.S. workers (and Bob Cesca of HuffPo notes here about the hypocrisy of individuals like Sen. Charles Grassley who profess to support American workers but have, in fact, voted for every “free” trade bill that has come across his path).

And by the way, Bill, if you still have a shred of a good instinct remaining towards your fellow man, you might want to take a look at the case of Waskar Ari Chachaki (noted here), a visiting professor from Bolivia who last taught at the University of Nebraska but who has been denied a visa to reenter this country. His students would greatly benefit from his ability and perspective on a foreign culture (though we’re only talking about humanities here and not computer science as far as you’re concerned, so I guess I’m supposed to understand why you wouldn’t care).
Posted by doomsy at 8:10 AM