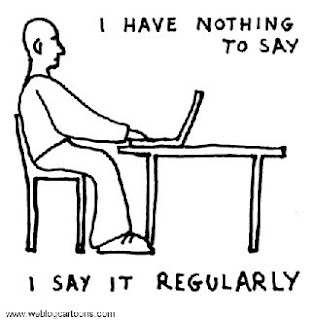 I think anyone who reads blogs or posts content of any kind realizes that it truly is a free-for-all in many ways, with potential for truly wondrous work or the type of dreck to make anyone wonder why we ever decided to graduate from movable type.

Some recent observations in this vein came from Mark Bowden in the Philadelphia Inquirer last week here, in which he proclaimed that “blog sites offer a rudimentary working model” by which reporters can be corrected and/or obtain additional information for a story; though I give Bowden credit for trying to visualize means for a reader to retrieve information beyond paper and ink, I think he trivializes the impact of blogs in an almost comic fashion, still imagining a universe where a particular story is owned completely by a “professional.”

The Inquirer also published a review of the book “The Cult Of The Amateur: How Today’s Internet Is Killing Our Culture” by Andrew Keen yesterday, which brings us these choice nuggets…

The core of all this monkey business, says Keen, is the blog. As this book was being written, he estimates, there were 53 million blogs on the Internet, which suggests that by 2010 there will be 500 million blogs spewing an endless stream of amateur journalism, uninformed commentary, and wretched poetry, fiction, reviews and essays.

Wikipedia, the online encyclopedia that allows anyone to make or rewrite entries, makes matters worse, in Keen's view. He points out that Wikipedia has no reporters, no editorial staff, and no experienced news harvesters.

"It's the blind leading the blind - infinite monkeys providing infinite information for infinite readers, perpetuating the cycle of misinformation and ignorance," Keen writes.

The monkeys, he adds, are not confined to just expressing themselves through the written word. They also are equipped with camcorders that give rise to Internet portals such as YouTube, which draws in more than 65,000 new videos a day.

"YouTube eclipses even the blogs in the inanity and absurdity of its content. Nothing seems too prosaic or narcissistic for these videographer monkeys. The site is an infinite gallery of amateur movies showing poor fools dancing, singing, eating, washing, shopping, driving, cleaning, sleeping or just staring into their computers," he writes.

The increasing popularity of YouTube and such sites as MySpace, Facebook and Bebo evidence societal obsession with self-broadcasting in which the Internet is the mirror for projecting personal images and views.

"Rather than using it to seek news, information, or culture, we use it to actually be the news, the information, the culture," Keen says.

Because of the abundance of free content that these sites make available, all of this digitized narcissism is bad news for newspapers, magazines, advertising companies, television networks, music companies and Hollywood and book publishers, he contends.

This so-called democratization of media, which cuts out the gatekeepers, experts and authorities, is leading, as Keen sees it, to a state of affairs in which there will be no way to distinguish quality from garbage, fact from falsehood, and, ultimately, good from evil.

First of all, Wikipedia actually does have standards for editing and fact-checking, though of course, as is true with anything online, it is possible to hack into something or generate some error affecting content (I seem to recall that happens with newspapers also).

Second, I’d like to see Keen devote some attention to the corporatization (word?) of our media and how that affects the type of content that appears and the manner in which it is reported. Some of his “infinite monkeys” would disappear if, for example, there were better reporting of presidential candidates beyond the superficiality of poll numbers and fundraising totals, as well as other dreck.

Besides, if Keen really believed this, then he should never have consented to publication of anything related to his brilliant tome online (try "walking the walk" here, OK dude?).

Actually, a reference to “infinite monkeys” is an appropriate setup to this story which proclaims that Repug presidential wannabe Fred Thompson fancies himself as a blogger.

OK, so let’s see this evolving online force in action, shall we (as noted in the story)…

Thompson has been the most active campaign blogger by far, and those who know him say he writes nearly everything himself -- not always the case in modern politics.

"It's not that we wouldn't use all the traditional campaign tools, but what he has seen on the Internet is the ability to directly engage real people and have a conversation," said Thompson spokesman Mark Corallo.

The blog entry that attracted the most attention was his criticism of liberal filmmaker Michael Moore for traveling to Cuba. In response, Moore challenged Thompson to a debate and criticized him for hypocrisy because the actor was fond of Cuban cigars.

In a YouTube video response, Thompson chomps on one of the offending cigars while suggesting Moore look into the case of a dissident Cuban filmmaker who Thompson said was committed to a mental institution.

"A mental institution, Michael," Thompson said. "Might be something you ought to think about."

And believe it or not, there’s still more to come (gosh, what a titan of intellect – move over, Kos and Atrios)…

In other blogs, Thompson has praised the election of Nicolas Sarkozy as president of France and belittled the Bush-backed immigration bill languishing in Congress, opposed by many Republican conservatives.

"No matter how much lipstick Washington tries to slap onto this legislative pig, it's not going to win any beauty contests," he said.

He compared Israel's retaliation to rocket attacks to the U.S. response if Mexican troops had launched daily attacks on San Diego.

"I can tell you, our response would look nothing like Israel's restrained and pinpoint reactions to daily missile attacks from Gaza," he said.

Gosh, a U.S. attack on this country by Mexico, huh? How prescient of Thompson to observe that our “friends to the south” would thus attack a city where many of their countrymen are no doubt illegally employed. But if Fred posted that it will happen, he must know something we don’t, right?

In a more serious vein, I was able to track down this information from Technorati about blog authorship and readership that I thought was interesting...

In its April 2006 “State of the Blogosphere”, leading blog search engine, Technorati reported:

And when it comes to new blog authors, here’s hoping that, before too much longer, Fred Thompson will grow bored with it and no longer be a contributor, much like the way he apparently grew bored with being a lobbyist and decided to become a politician many years ago.
Posted by doomsy at 11:33 AM