Dubya Fizzles In The Heat 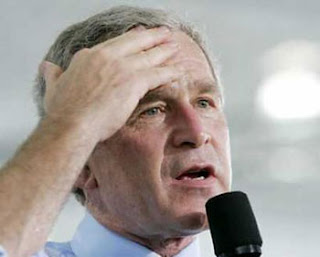 …North Korea’s declaration of its nuclear activities is a triumph of the sort of diplomacy — complicated, plodding, often frustrating — that President Bush and his aides once eschewed as American weakness.

In more than two years of negotiations, the man who once declared North Korea part of an “axis of evil” with Iran and Iraq, angrily vowing to confront, not negotiate with, its despotic leader, in fact demonstrated a flexibility that his critics at home and abroad once considered impossible.

And as a follow up, Christiane Amanpour tells us here that Pyongyang blew up part of its Yongbyon nuclear plant Friday.

OK, I’ll admit that I don’t know all the “hows” and “whys” about this yet, so I will grudgingly give Bushco credit for now until I learn more about this (and the “other shoe” is bound to drop at some point).

However, a bit later in the story, Myers (in a column charitably called “News Analysis”) tells us…

…after years of international isolation on the issue of global warming, his administration is now offering to negotiate an agreement on cutting emissions with the world’s major developed and developing nations, a plan that received a surprisingly warm response during his visit to Europe this month.

Meanwhile, in the land of reality, this tells us how Bushco has spent years fighting the scientific fact of global warming as part of the climate crisis, and this tells us how EPA stooge Stephen L. Johnson forced out the agency’s top regulator Mary Gade because of a little snit with Dow Chemical.

And what exactly has brought about this supposed spurt of activity by one of the most morally and intellectually bankrupt individuals I have ever seen beyond merely the U.S. presidency?

The problem for Mr. Bush is that time is running out.

Not just for him, but life generally on this planet as well (and thanks for speeding up the timetable, President 23 Percent Mandate).