The Supremes Go For A Swim 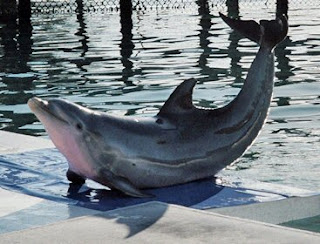 This is an update to a story I previously posted about here; Bushco and the Navy have been fighting environmental groups off the southern California coast for awhile now over the issue of conducting military exercises involving sonar because of the harmful effects on marine life.

In February, the 9th U.S. Circuit Court of Appeals ruled in favor of the environmental groups. Well, today, it turns out that the case will be heard by the Supreme Court...

The court is also in the habit of overturning the 9th Circuit. The Supreme Court has reversed the 9th Circuit in seven cases and upheld it only once this year, according to statistics compiled by scotusblog.com.

I can just see it now; Dubya and the Supremes have the mammals declared “enemy combatants,” and since the Geneva Conventions don’t apply to marine life, they’ll be captured and relocated to specially-built tanks at Guantanamo and water boarded with impunity until they admit by cued noise response that they’re actually terrorist sympathizers. And then the sonar testing can proceed as planned, and if any of them end up “beached”…well, it’ll just be another victory in the Global War On Terra Terra Terra, You FISA-Hatin’, Nancy Pelosi Headscarf Wearin’, al Qaeda-Lovin’, President Not Supportin’ Liburuuls!

I guess, since we don’t have enough enemies, now we have to attack fish too?

What country am I living in again?
Posted by doomsy at 3:48 PM