How A Real Democrat Stands Up On FISA 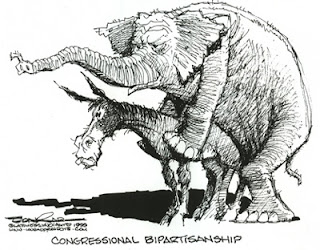 Today the House of Representatives voted on H.R. 6304, the FISA Amendments Act of 2008.

I have consistently supported modernizing the existing FISA law to give our intelligence community the tools it needs to identify and defeat terrorists in today's high-tech world, while at the same time preserving the freedoms and rights that define America. Three times I voted to pass legislation that would strengthen and modernize FISA and reaffirm the rule of law. Although today's bill made some improvements over previous attempts to update FISA, H.R. 6304 regrettably fell short of achieving that critical balance. The rule of law lies at the core of America's founding principles, and the language in this bill was too weak to ensure that any breach of our laws that may have occurred under the Bush Administration's warrantless wiretapping program will be fully addressed. It is wrong to deny Americans the right to pursue these matters in court, or to short-circuit the judicial review that lies at the heart of our system of checks and balances, the bedrock of our Constitution. Accordingly, I voted against this bill.

I will continue to support real protection of our country from terrorist threats, while at the same time fighting for robust oversight by the Legislative and Judicial branches of our government.

I disagreed with Patrick Murphy once on his support for Mike Fitzpatrick's "Delete Online Predators" Act which purported to keep our kids safe by banning access to social networking sites at libraries and schools (which, to me, sounded more like the Act was trying to shield schools and libraries from legal liability), but I thought, "well, maybe the polling on this shows that most of the 8th District residents support it despite how I feel, so maybe THAT is why Patrick went along with it."

However, someone is going to have to present evidence to me that the 8th District majority of voters approve of granting liability to the telcos, since that is what this latest "compromise" boils down to (and if you don't want to believe me, fine; read Glenn Greenwald - I won't be offended). I believe it was Dana Milbank who told Keith Olbermann on "Countdown" Friday night something to the effect that some Dem U.S. House reps in conservative districts were saying "Hey, Pelosi and Hoyer, you've got to get me a FISA bill because I'm endangered" or something, so they came up with this mess. Either way, the "compromise" is nothing but a cheap sellout.

Also, please take note of some wording I've inserted into the right column of my home page on this, if you would. Thanks.

And as Darcy says again here, "more and better Democrats" (maybe in PA-08 and 07?) - for what it's worth, I'm going to be royally pissed off about this for a long time.

My observation about citizens in the 8th district based on letters to the editor and calls to radio talk shows is that if "you are not doing anything wrong you have nothing to be afraid of". This mindless babble is what politicians count on.
They not only granted immunity to the telecoms but to themselves and the president.
I am also "pissed off" but realize the politicians do not give a damm if we are.
The term of office for the house is 2 years, voters should clean house turn them all out but what the hell, there is no guarantee the replacements will do the right thing for the country and not for themselves.
John Adams is weeping.
God damm them all.

I understand your comment that the majority of people apparently don't care about this, and the evidence to me seems to indicate that you're right (and the 8th district, though trending Dem, is still highly conservative).

As my anger over this subsides a little (but not much), it makes me wonder if Nancy, Steny, Jello Jay in the Senate and the whole sorry bunch didn't just decide, "well, we'll come up with SOMETHING around the time when people are going on vacation, and maybe most people won't notice."

Aside from sending the message to us that they think we're stupid, the people who supported this really don't get the fact that the whole FISA issue represents the Bush "administration" in a nutshell. They have communicated the message over and over and over that they are going to do whatever the hell they want and they...don't...care...what...anybody...thinks. And they won't stop acting like that until someone - or something - makes them. And that is exactly how they approached this issue. They were NEVER going to give on the question of who makes the call on telco immunity, them or the courts.

And I can tell you right now how the Repugs are going to spin this as we head into the fall. Are they going to say, "Well, we worked with the Democrats to achieve a consensus?" HELL NO! They have NEVER done that! They're going to say, "By God, we had to fight those terrorist-loving Democrats for MONTHS to get the president what he wanted on FISA, and WE FINALLY WON! And by the way, it's the Democrats' fault also that gas costs $5 a gallon."

I'm sick of watching Democrats cave in to these hoodlums. To tell you the truth, it's beginning to make me wonder just how "dirty" some of them truly are.

I'll still vote Democratic, though, even if they look more and more like the opposition every day. But if I get the chance to help bounce any of these charlatans who refuse to stand up to George W. Milhous Bush, I'll grab for it with both hands.

The administration has nothing to fear from the courts either. Congress went to court to enforce compliance with the subpoena's in the attorney general investigation and the judge is reluctant to do his job. Imagine that, a judge with a historic case in front of him and he does not want to rule on it. Guess he is afraid to stand up to the administration too.
This country is in deep trouble. The story is linked here on MSNBC.
http://www.msnbc.msn.com/id/25331654/