"No Cred Fred" Looks For A Hand 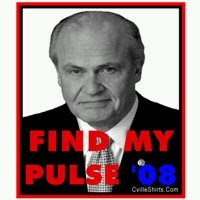 So with all of the electoral hoopla currently going on in New Hampshire on the Repug side with the media pronouncing John McCain the winner, Mitt Romney trying to outspend everyone, Ron Paul supporters declaring war on Faux News (yaay!), Mike Huckabee wondering if cranky New Englanders care about the opinion of Midwest fundies (and Rudy! off to Florida? Wha??), there is one question lurking somewhere in my mind, and America deserves an answer.

Where exactly is Grandpa Fred anyway? Did he get lost, or just wake up too late from his nap?

Well, Christine Bynum of ABC News has the answer here; it turns out that he’s in South Carolina already.

"Everyone is in New Hampshire … [we're] not playing up there," Thompson told a crowd of about 100 people at a diner in Greenville, S.C. "Still got snow banks six feet high there and we're down here in South Carolina, so I ask you who’s the smartest one?"

Dude, you’re not going to have a shot at the Granite State’s electoral votes admiring the beauty of the jessamines, OK?

And just for good measure, Fred tosses in a hosanna to Strom Thurmond. How nice.

At his morning event, he played up his Southern roots, joking "people can understand what I'm saying down here."

I guess they’re also still fighting the Soviet Union in South Carolina, then? And they don’t know whether their state flag is posted in a public place or not?

Of course, this is all about a man who seemed to grow bored both with being a blogger (too funny) and a corporate lobbyist (here).

The thought of Fred Thompson as president is more laughable than frightening, but it’s truly scary for me to contemplate the alleged life forms who would actually vote for him.
Posted by doomsy at 11:51 AM