Wanna Watch "Seven Days In May"? 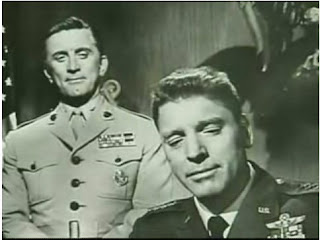 This post from Chris Bowers at Open Left, echoing Matt Yglesias, tells us that the winner of the Repug primary in New Hampshire, along with his fellow party mate Joe Lieberman, believes we…

…should adjust those (Iraq troop) numbers based on conditions on the ground and the recommendations of our commanders…first and foremost, Gen. Petraeus, who above all others has proven that he knows how to steer this war to a successful outcome.

Can someone please notify me when this “successful outcome” in Iraq is finally achieved? Because only then will I make a final judgment as to whether or not Petraeus and our military leadership have been successful (as opposed to those in our political leadership who aren’t so stupidly willing to cede the power they were endowed by virtue of their election to public office; actually, the character played by Burt Lancaster wouldn’t even have to stage a coup since “Senator Honor And Virtue” and his “independent” flunky would hand the power over to him).

And in other war news (here)…

Democrats are likely to try again to set a timetable on troop withdrawals from Iraq when Congress reconvenes this year. But with Republicans sticking firmly behind the president, Democrats know it is unlikely such measures will pass for now.

Some moderates say they hope 2008 will be the year of compromise, in which Democratic leaders will agree to swing behind softer anti-war legislation in a bid to entice moderate Republicans. Republican support for legislation is crucial because Democrats hold a narrow margin of control in Congress and lack the two-thirds support to overcome a veto.

Here we go with the same pathetic song-and-dance we heard about this time last year from Repugs like John Warner and Huckleberry Graham about how they might be persuaded to support a timeline for troop withdrawal (and nothing changed, of course).