"Channelling" Martin And Roberts On “A La Carte” Cable 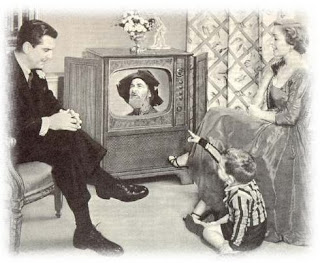 (Note: I’m posting about this partly because there is so much stupid pundit blathering about New Hampshire last night that I’m trying to do something different – and yes, I’ll admit that it was bad news for John Edwards, though we have a ways to go here.)

The Philadelphia Inquirer notes here that Comcast CEO Brian Roberts gave the keynote address at the Consumer Electronics Show in Las Vegas yesterday, with Roberts using the opportunity to plug “tru2way,” the company’s “new technology to allow electronics manufacturers to develop interactive devices that work on its 25-million-subscriber cable network,” according to the story.

However, FCC Chairman Kevin Martin, while participating in a panel discussion said that “tru2way” was “a good start, but not the final solution.”

Industry analysts who know more about this stuff than I do think that Roberts and Martin aren’t exactly buds these days because of Roberts’ opposition to “a la carte” cable (supported by Martin) which basically means that cable subscribers would pay for each channel and (so the thinking goes) lower cable TV rates.

Part of what’s difficult for me concerning this story is that it involves two really bad apples as far as I’m concerned; this related New York Times story (referenced in the Inquirer) notes that Martin’s FCC is investigating complaints of Comcast’s alleged interference with online file sharing (a ruling against Comcast would help bolster Net Neutrality as an abiding principle of Internet activity – the FCC has broadly supported it, but that support hasn’t been tested yet).

And as far as Martin is concerned, he narrowly missed being named Dregs Of The Year by yours truly for 2007 (for whatever that’s worth – not much, I’ll admit…many reasons, notably this one).

Martin touts “a la carte” cable as a means to lower subscriber rates, but as noted here…

According to the FCC, the average family only watches seventeen channels. If this describes your family, then there is a chance that you could save money with a la carte programming. However, Booz Allen Hamilton, an industry consultant, says that the FCC overestimated the average cost per cable channel by as much as fifty percent. This so-called error really makes the difference in whether the average family would save money on pay-per-channel programming or not.

(Martin) is the commission's strongest supporter of the change. His primary concern seems to be that cable companies have been raising their rates consistently over the last few years. In the last five years, for example, the average family's television spending increased by 35.7 percent. Martin explains that the FCC is getting involved to try and persuade cable companies to better meat (sic) consumer demands.

The cable operators, as you might expect, don’t think so…

…(they) say full channel choice will result in extra costs for customers, who already pay an average of $40 each month for "extended basic cable" which usually includes between 70 and 80 channels.

"Under an a la carte plan, that same $40 would probably result in a handful of channels, fewer than 10," says Brian Dietz, spokesman for the National Cable & Telecommunications Association, an industry trade group in Washington. The existing "bundle" plans provide "the best value and widest variety of programming for the customer," he says.

I very reluctantly have to go along with the cable operators here, partly because of this (also noted in the CS Monitor story)…

…Rep. Loretta Sanchez (D) of California, warned in a newspaper column last month that "the cable industry's most exciting new talent - scores of programs for Latinos, African-Americans, women and others - would be the first casualties" of an a la carte system because they wouldn't be able to reach enough viewers to survive.

Kevin Martin has one goal and one goal only as FCC chairman, and that is to consolidate the corporate voice at the expense of all others (yet another example of the “values voters” getting played by the Repugs here, since some of their “Bible beaters” of choice could end up getting cut out also). He could care less about rising cable rates; he just wants to pretend he does so we all have our “bread and circuses” and remain as compliant as possible while the information we need to make informed decisions slowly grinds to a halt at the behest of Time Warner, Disney, Microsoft, and General Electric.

Concerning Comcast, though, I should note that this is a theoretical argument only for your humble narrator, since the Doomsy household switched over to Verizon FIOS a few days ago (for a better price, we get enhanced picture quality and sound on TV and much faster Internet connectivity).

And I’ll be honest; we also walked away from Comcast because they continue to give a pay check to this guy (haven’t come up with a “next step” yet, but I’ll think of something).