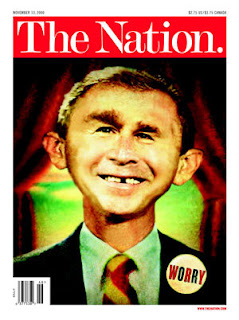 From this post I found on the web site of the Baltimore Sun yesterday, concerning the visit of George W. Milhous Bush to the Middle East...

BETHLEHEM, West Bank — After descending the stone stairs to the dim grotto beneath the Church of the Nativity, President Bush lit a candle Thursday and stood in silent, somber reflection at the place where Jesus Christ is believed to have been born.

Emerging a short while later into the sunlit courtyard outside, he described the experience as "a moving moment for me. ... For those of us who practice the Christian faith, there's really no more holy site than the place where our Savior was born."

From this post by Chris Kelly at HuffPo yesterday...

"War on the one hand is such a terrible, such an atrocious thing, that no man, especially no Christian man, has the right to assume the responsibility of beginning it." - Tolstoy

And don't worry; even though Coulter would never return the favor and Kelly's post is funny, I won't take a shot at her as she deals with the recent loss of her father.

And time is short at the moment, so I also wouldn't expound on the laughable notion that George W. Bush is actually a Christian.
Posted by doomsy at 8:45 AM