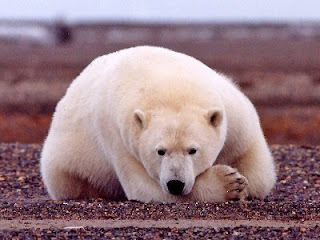 The Philadelphia Inquirer, in its “Lightning Round” editorial segment today, actually made a good observation concerning the delay of Bushco’s Interior Department (under Dirk Kempthorne, who is at least as big of a disaster for the environment as his predecessor Gale Norton) to list the polar bear as an endangered species, allowing the Minerals Management Service to “open up nearly 30 million acres of Alaskan waters to oil and gas leasing in the heart of polar bear country.”

By the way, the head of the Minerals Management Service is Randall Luthi, who rose within the Repugs ranks with the mentoring of “Deadeye Dick” Cheney (both came from Wyoming). Need I say more?

And in this related New York Times opinion column from last Saturday, Alaska Repug governor Sarah Palin makes a few disingenuous arguments against listing the polar bear as endangered, including this one…

“(It would be) based on uncertain modeling of possible effects.”

That’s some fancy language that translates to “junk science,” by the way. And Palin also states that “the Endangered Species Act is not the correct tool to address climate change,” a sentence which, to me, is breathtaking in its stupidity.

And here with the point of view of the reality-based community is Kassie Siegel, climate program director at the Center for Biological Diversity…

(Siegel) said all science has a degree of uncertainty but that uncertainty is very low for the polar bear.

Polar bears eat mostly seals and other fatty marine animals that they hunt from sea ice. The bears prefer to hunt from ice that hangs over shallow continental shelf waters, which contain more prey than deeper waters offshore.

But summer sea ice in the polar bears' Arctic habitat is shrinking and retreating farther and farther from the coastline, which crimps the bears' ability to forage efficiently. Some bears are starving to death.

"We know what we have to do to save polar bears," she said. "We just have to start doing it."

And to help, click here (and a reminder for our dear corporate media cousins appears below).