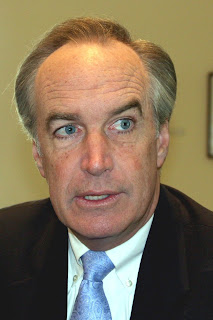 This editorial appeared in the New York Times yesterday…

Dirk Kempthorne’s arrival in Washington as secretary of the interior raised hope among conservationists that he would moderate the Bush administration’s aggressive search for oil and gas in some of the country’s most environmentally sensitive lands. This has not happened. The Bureau of Land Management, which issues drilling leases and permits, seems to moving as recklessly as it did under Mr. Kempthorne’s predecessor, Gale Norton, and even the administration’s natural allies have finally had enough.

Last Friday, the Theodore Roosevelt Conservation Partnership sued the Interior Department to protest the recent authorization of 2,000 new oil and gas wells, along with 1,000 miles of roads and another 1,000 miles of pipeline in a wildlife-rich area of south-central Wyoming known as the Atlantic Rim. The suit accuses the bureau of multiple violations of federal law, including the requirement that it fully assess less destructive alternatives. It also notes that the bureau itself conceded that under its plan the “natural setting would be converted to an industrialized setting” with severe adverse impacts on mule deer, elk and pronghorn antelope.

The partnership has previously protested leases in sensitive areas of Montana, Utah and other Western states and registered dismay with the administration on a range of environmental issues. This is its first lawsuit against the government, and one it did not undertake lightly — in part because it is not a litigious group and partly because the hunters and anglers who make up the bulk of its membership tend to be largely Republican.

That the partnership is now going to court shows how distasteful the administration’s public lands policies have become and how little they have changed since Vice President Dick Cheney, in his notorious energy report, ordered up a full-court press for domestic oil and gas resources regardless of the environmental consequences. Like other conservation groups, the partnership has never disputed the need to develop supplies of natural gas, nor has it objected to responsible development undertaken at a measured pace with due regard for other values, including the protection of wildlife.

What drove the partnership over the edge and into court was the sheer one-sidedness of the administration’s approach, as well as its reckless disregard for the law, and if that does not get Mr. Kempthorne’s attention, nothing will.

And regarding his arrival (mystified by the Times' note that conservationists expressd hope, I must admit), Timothy Noah of Slate called him “the Democrats’ godsend” back in August of 2003, and also noted (back when Kempthorne’s selection to replace Gale Norton was not yet confirmed; Norton should also have her face on a Wanted poster fixed upon every tree in America)…

If it is Kempthorne, Bush will have made a comically anti-environmental choice. During six years in the Senate in the 1990s, Kempthorne scored a "0" on the League of Conservation Voters' legislative scorecards every year except 1993, when Kempthorne scored 6 percent on the basis of one little-remembered vote against funding a rocket booster for the space program that environmentalists judged harmful to the environment. Knight Ridder's Seth Borenstein reported June 23 that in the two years after Kempthorne became governor of Idaho, the state increased toxic emissions by 2 percent—this during a period when the national average declined by 9 percent. The chief of staff for Idaho's Department of Environmental Quality told Borenstein that environmental inspections were at "a bare-bones minimum" aimed only at staying in compliance with a state court order. Kempthorne did battle with EPA Administrator Christie Whitman over an Idaho Superfund cleanup, at one point threatening to evict EPA officials from the state.

Also, Kempthorne appears to be either unique, less discreet, or less lucky among his Repug brethren, though, in that some of his, shall we say, extracurricular activities have drawn more notoriety than his same-party peers (or, as 43rd State Blues notes here, Dirk seems to "like his pages bent over," if you know what I mean).

And as noted here, our boy Dirk "surrounded the Idaho state capitol with concrete barriers and other security measures in the wake of September 11. It seems that rather a lot of people (were) upset that Dirk spent $335,000 on his hidey-hole when the rest of state government is cutting spending in other areas."

All the better for Dirk’s “leisure activities,” I suppose.
Posted by doomsy at 3:33 PM