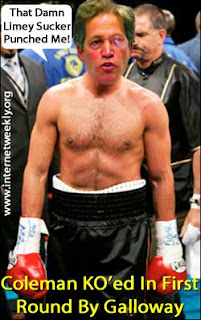 For anyone who remembers the histrionics of Sen. Norm Coleman and his confrontation with British MP George Galloway over the Oil For Food scandal, whereby Iraq was allowed to trade some of its oil for humanitarian assistance in the wake of sanctions after the first Gulf war (though Saddam Hussein ended up exploiting the program as well as many others), it should be noted that the first individual convicted on charges related to the scandal was an American (Coleman didn’t exactly enhance himself with his baiting of former U.N. Secretary General Kofi Annan at that time either).

…David B. Chalmers Jr., admitted that he and two companies he ran, Bayoil USA and Bayoil Supply and Trading, made millions of dollars in kickbacks to the Iraqi government — as well as huge profits — while trading oil under the $65 billion aid program.

In April 2005, Bayoil USA became the first American company to be indicted in the wide-ranging criminal investigation of the program, which was established by the United Nations in 1995 to ease some aspects of the sanctions imposed on Iraq after it invaded Kuwait in 1990. Under it, Mr. Hussein’s government could use the money from limited oil sales to buy supplies like food and medicine.

The authorities said Bayoil and Mr. Chalmers not only made illegal payments to get Iraqi oil but also conspired to artificially lower its price, thus depriving the Iraqis of money for items they sorely needed. A man described by the authorities as an associate of Bayoil, Ludmil Dionissiev, a Bulgarian oil trader living in Houston, also pleaded guilty yesterday to charges of fraud and conspiracy in the case.

“Motivated by greed, they flouted the law, made a mockery of the stated aims of the oil-for-food program and willingly conspired with a foreign government with whom our country was on the brink of war,” John A. Klochan Jr., an F.B.I. official in New York, said in 2005 when Mr. Chalmers was arrested.

Mr. Klochan also said Mr. Chalmers and others had turned the United Nations program into a “cash cow masquerading as a humanitarian venture.”

As the Wikipedia article notes, the program was a product of the Clinton Administration, which believed that it could mitigate the effect of sanctions against Iraq. However, I don’t understand how sanctions against a country can ever hope to achieve anything, especially now, when the country in need will simply negotiate with another country that sees an opportunity for profit (re, China, India, etc. – again, darkly tragic that we’ve waged war on Iraq, which never attacked us, but regularly do business with countries that have or have supported regimes against us such as Japan, Germany, and China).

Sanctions give us the illusion that we’re trying to oppress a regime that could wage war against us one day, but all they ever do is radicalize people who never had an axe to grind with us to begin with. It would have been nice if Clinton had managed to lift the sanctions instead of trying to mitigate them with the oil-for-food program, but if he had, he probably would not have won a second term in office.

good stuff, cheers for the info. I'm sure it will be handy in dealing with some eejit in the future...

You're welcome - my pleasure.