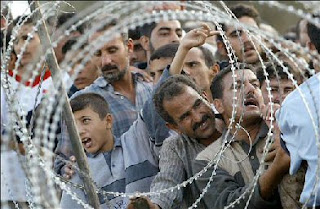 This link takes you to a New York Times analysis yesterday of the latest dunderheaded nonsense from Dubya in comparing the Iraq war to Vietnam (glad to see “the old gray lady” clarifying the latest stupidity, such as his claim that our exit from southeast Asia gave birth to the Khmer Rogue, when in fact they had already existed and were defeated by the Viet Cong in 1979; I’ll grudgingly admit that our presence was a factor in their ascent, though).

It’s not my intention to dissect everything in this column, but I want to highlight this excerpt…

“If one is really concerned about the Iraqi people, and the fate that may be awaiting them as this war winds down, then we ought to get serious about opening our doors, and to welcoming to the United States those Iraqis who have supported us and have put themselves and their families in danger.”

Those words were spoken by Andrew J. Bacevich, a platoon leader in Vietnam who is now a professor of international relations at Boston University (and Bacevich knows the ultimate price of war, by the way…my sympathies). And I think he is absolutely right.

It was my intention to note this story long before now, but Bacevich’s comment yesterday gave me a good reason to do so today; the Times of London tells us of the plight of those Iraqis who assisted the British military, only to face greater risk now as they try to escape from the carnage…

At first, (R Mageed, married with a one-year-old daughter) leapt at the chance to work for the British military in Iraq. He had been studying English at university. “When I started my work three years ago there was no trouble. All the people liked the British. I wanted to help them,” the young man said, surrounded by the three other Iraqi interpreters, who were all just as anxious to tell their story.

“At the time, however, the militias were forming and the people started to support the militia and hate the British Army. That put all the Iraqi interpreters in danger. One of our friends, Ali, was shot dead.”

They dare to travel home only once a week for a two-day break before coming back to work. “What will we do when the British troops leave Iraq? If we stay the militia will kill us,” Mr Mageed said.

Stuck in small cabins, with little to do other than chat to each other and the Irish Guards who are training members of the Iraqi Army, the interpreters say they long for a life of freedom, and without fear. “We want refugee status from the British because the Danish gave their interpreters asylum,” a second member of the group, A. Yassin, 36, said.

And this CNN story tells us the following…

The young Iraqi known as Ronnie fears for his life. Nearly four years ago, as a recent high school graduate, he signed up to be an interpreter for the U.S. military. It seemed like a good job at the time. Today, he is a marked man.

"I swear, my god, every other night, I have a nightmare that some militia is trying to kill me," he says. "I've lost hope. I can't see any future to this country. That's why most of the interpreters want to get out of Iraq."

But for Ronnie and thousands of other interpreters working with the U.S. military, getting out is unspeakably difficult. And with insurgents and death squads viewing them as collaborators with the enemy, going back home isn't a realistic option, either.

"[W]e drove by my house, and you know how painful it is that when you see your house and you can't stop to see your dad or your brother or your mom to say 'Hi,' " Ronnie says.

To help take care of people like Ronnie, the U.S. government is offering 1,000 special immigration visas over the next two years for Iraqis and Afghans working with U.S. forces. But that accounts for just a small percentage of the roughly 9,000 interpreters working with the United States in Iraq. Tens of thousands of others work with various government agencies and contractors. The numbers don't include the interpreters' families.

This takes you to information on H.R. 2265 in the U.S. House of Representatives, which is a bill to grant special immigrant status for certain Iraqis and to assist Iraqi refugees. It seems that the only actions currently taking place on this bill and companion legislation are a lot of introductory remarks so far.

And this takes you to information on similar legislation sponsored by Ted Kennedy in the Senate, along with six other Senators including Biden – I know I was all over him earlier, but he’s doing the right thing here – and The Last Honest Man, which is only appropriate, since he, McCain and a few others own this Iraq mess more than anyone else, aside from President Stupid Head of course.

Oh, and speaking of enablers of the war, let’s never forget why the neocons and some liberal simpatico types who apparently doubted their manhood felt we had to initiate this epochal horror (the explanation is provided below by Little Tommy Friedman – h/t Atrios).

What they needed to see was American boys and girls going house to house, from Basra to Baghdad, um and basically saying, "Which part of this sentence don't you understand?"

You don't think, you know, we care about our open society, you think this bubble fantasy, we're just gonna to let it grow?

That Charlie was what this war was about. We could've hit Saudi Arabia, it was part of that bubble. We couldn't hit Pakistan. We hit Iraq because we could.

Why is it these NeoCons only get concerned with the toll on human life war takes after the fact?

After the death of hundreds of thousands of Iraqis and thousands of U.S. Soldiers now the NeoCons are afraid of we leave, there will be carnage.

There already is carnage. They all knew full well it would be chaos and carnage before we invaded and yet still chose to do so. Cheney 94' knew it would be a mistake to invade Iraq which is why we didn't after Desert Storm. We knew there would be sectarian violence and ethnic cleansing.

The lesson Bush learned from Vietnam is that not enough lives and not enough money has been spent yet for us to leave.

Another lesson he learned was to make sure it was someone else risking his or her life for this supposedly sainted cause of his so he could be eternally free to do his dog and pony show in front of loyal audiences far away from the blood and carnage created by his willful mistake - thanks.