So Release The Damn Report Already! 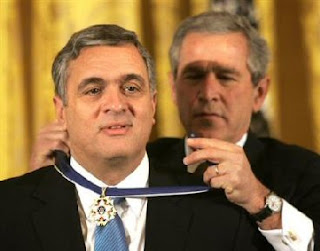 Former CIA Director George Tenet (pictured) did not marshal his agency's resources to respond to the recognized threat posed by al-Qaeda before the Sept. 11 attacks, the agency's inspector general (John Helgerson) concluded in a long-classified report released today.

A 19-page executive summary of the report, completed in June 2005, said it could not find a "single point of failure nor a silver bullet" that would have prevented the attacks, but went on to fault the senior management of the CIA for failing to deal with the al-Qaeda threat. "The agency and its officers did not discharge their responsibilities in a satisfactory manner," a team led by (Helgerson) found.

The report, which in part sought to determine whether any intelligence officials should be held accountable for pre-Sept. 11 failures, said that as early as December 1998, Tenet signed a counterterrorism memorandum declaring, "We are at war." But neither Tenet nor his deputy "followed up these warnings and admonitions by creating a documented, comprehensive plan to guide the counterterrorism effort," the report said. Tenet's deputy chaired at least one related meeting, "but the forum soon devolved into one of tactical and operational, rather than strategic discussions."

Moreover, the Counterterrorist Center (CTC) "was not used effectively as a strategic coordinator of the [intelligence community's] counterterrorism efforts," the report added.

Tenet, of course, refutes this, and current CIA director Michael Hayden said he, “he did not want to release the report, saying it ‘would distract officers serving their country on the front lines of a global conflict. It will, at a minimum, consume time and attention revisiting ground that is already well plowed’.”

As Digby notes here, this report (completed in 2004 as she notes, despite the WaPo’s claim that it was completed in ’05) has been “well plowed” as it were under the proverbial rug by former acting CIA director John McLaughlin and former director Porter Goss (who disappeared the minute he was linked to poker parties and hookers at the Watergate here).

Let’s stop worrying about releasing sensitive information that could make Bushco or its alums look bad (with this administration’s stinky approval ratings and daily episodes of either scandal or malfeasance at the very least, how could that possibly matter any more?) and instead focus on how to better protect our country, OK?
Posted by doomsy at 1:28 PM