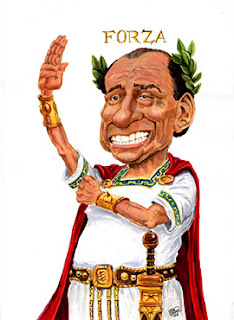 Gosh, it’s been just so darned long since I checked in with former Italian Prime Minister Silvio Berlusconi to find out what well-moneyed right-wing businessmen do with themselves to pass the time on “the continent” once they’ve fallen from power, I know.

You remember Silvio, don’t you? He tried to abstain from sex until last April’s Italian general election (no word on whether or not he succeeded), he once referred to himself as “the Jesus of politics,” and he held out for a time on calling his successor Romano Prodi to concede (though Silvio eventually acted like a stand-up guy and did the right thing).

Now, according to the Times of London here, he is promoting Michela Vittoria Brambilla as the head of something called the “Party of Freedom,” which I guess is supposed to a new conservative coalition or something. And as the Times also notes…

Brambilla runs a fish import business specialising in salmon and seafood, and is head of the Italian young entrepreneurs association. She has a two-year-old son, Vittorio, by her partner, Eros Maggioni, also a businessman.

Leave it to the swarthy Italians to choose Eros as a masculine name. Takes a bit of guts, I think, considering all of the schoolyard taunting you’d have to overcome growing up.

Well, I wish Berlusconi and Brambilla luck; we need all of the overseas, non-deadly political intrigue we can get. And I wish business-oriented conservatives in this country had a better eye for (and appreciation of) beautiful women.