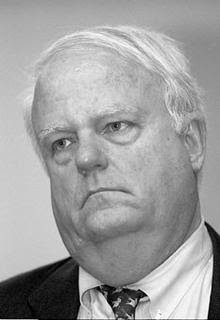 The Bushco beat goes on (here)…

Residents of at least 17 states are suddenly stuck in the middle of a fight between the Bush administration and state governments over post-Sept. 11 security rules for driver's licenses – a dispute that, by May, could leave millions of people unable to use their licenses to board planes or enter federal buildings.

And you just knew that DHS Secretary Mike (“City Of Louisiana”) Chertoff was in the middle of this somehow, didn’t you?

(Chertoff), who was unveiling final details of the REAL ID Act's rules on Friday, said that if states want their licenses to remain valid for air travel after May 2008, those states must seek a waiver indicating they want more time to comply with the legislation.

Or, of course, Chertoff could use some common sense for a change and actually delay implementation until the concerns of the states in question were addressed…but we know that’s not Bushco’s “M.O.,” don’t we?

Chertoff, as he revealed final details of the REAL ID Act, said that in instances where a particular state doesn't seek a waiver, its residents will have to use a passport or a newly created federal passport card if they want to avoid a vigorous secondary screening at airport security.

“The last thing I want to do is punish citizens of a state who would love to have a REAL ID license but can't get one,” Chertoff said. “But in the end, the rule is the rule as passed by Congress.”

And what an appropriate transition to this Wikipedia article on the REAL ID Act, which notes that the Act was “attached...as a rider on a military spending bill (H.R. 1268, which also included tsunami relief)” and then “passed the joint House-Senate conference report on that bill 100-0…There was no debate whatsoever on this piece of legislation.”

Of course there wasn’t. Why, who on earth would want to look soft both on the War On Terra, Terra, Terra You Godless Hillary-Clinton-Crying-Lovin’ Li-b-uruul and the urgent matter of assistance for the victims of a catastrophic act of nature halfway around the world by actually discussing this crappy legislation like adults?

And fittingly, Dubya signed this mess into law in May 2005 (stand up and take a bow one more time, you boneheads of the 109th Congress).

And if you’ll notice, the AP article states that “at least 17 states” are contesting REAL ID, but according to the Wikipedia article, it sounds like the only states that are nearing full compliance are California, New York, Alabama, North Carolina, and North Dakota. There are 17 states that have passed legislation opposing REAL ID, as noted, but there are 19 other states contemplating similar legislation.

Gee, that sounds like a pretty sizeable majority of our country opposes REAL ID, and this CNN legal analysis tells us why. In addition to the fact that this unfunded mandate puts huge financial burdens on the affected states…

...The act requires photos to be digital so authorities can include them in the multi-state database…But the IDs must also include additional features that drivers' licenses and non-driver ID cards do not incorporate.

For instance, the ID must include features designed to thwart counterfeiting and identity theft. Unfortunately, while including such features may sound appealing, on the whole, these IDs may make our identities less safe.

Once Real ID is in effect, all 50 states' DMVs will share information in a common database and may also verify information given to them against various federal databases. In addition, it's very possible that such data will be sold to commercial entities: Some states already allow driver's license data to be sold to third parties.

Even with current, unlinked databases, thieves increasingly have turned their attention to DMVs. Once databases are linked, access to the all-state database may turn out to be a bonanza for identity thieves.

Finally, the IDs must include a "common machine-readable technology" that must meet requirements set out by the Department of Homeland Security. And, somewhat ominously, Homeland Security is permitted to add additional requirements -- which could include "biometric identifiers" such as our fingerprints or a retinal scan.

It's that "machine-readable technology" requirement, along with the possibility of Homeland Security add-ons, that raises the most serious risk that the Real ID Act will cause privacy violations. (The fact that the technology must be "common" also raises the already-high risk of identity theft.)

The AP story also notes that the ID cards won’t contain microchips, a concern noted in the CNN analysis. However, who’s to say that that issue won’t be revisited by DHS?

And a huge issue for yours truly, among many others I’m sure, is who would be responsible for the manufacturing of these cards and how “open” would the technology be used in this process? And what kind of legitimate congressional oversight would be involved?

Personally, I’m still torn on the theory of a national ID card, which is what we’re talking about here of course despite the fact that the states are shouldering the burden (and this tells you how REAL ID was intended as a tool to be used by anti-immigrant hysterics such as House Repug James Sensenbrenner of Wisconsin, the creator of this monster, pictured above).