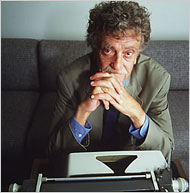 Imagine my horror when I discovered today that all of my Kurt Vonnegut books had apparently been donated to our local library (I mean, it’s a good cause of course, but all of them?).

I guess it’s easy to dismiss Vonnegut’s work as farcical absurdity without taking note of the comic (or sometimes tragic) behavior of his characters, reveling in their inexplicable humanity (transvestite car dealer Harry LeSabre in “Breakfast of Champions,” forever ridiculed by his demented boss Dwayne Hoover, in part because he shares his last name with a model of Buick while working for a Pontiac dealership; Malachi Constant in “Sirens of Titan,” which is also the title of a ‘70s prog rock pop song by Al Stewart from “Modern Times,” which features a harpsichord, by the way – nice touch; and of course Billy Pilgrim in “Slaughterhouse-Five,” a man seemingly oblivious to time and space as we perceive it).

However, to categorize Vonnegut as some sort of kooky burnout from the ‘60s is to do him a huge disservice (he was prone to the personal turbulence of many great artists, including a suicide attempt in 1984). I cannot imagine the intricate operations of an intellect that could concoct such fantastic tales, yet make his characters somehow universal and resonant to the reader at the same time.

I can come up with all kinds of interesting recommendations here, a few of which I’ve just mentioned as well as “Cat’s Cradle,” “Player Piano,” and “God Bless You, Mr. Rosewater.” However, I want to point out that public television produced a movie of a Vonnegut short story in 1982 called “Who Am I This Time?” with Christopher Walken and Susan Sarandon that was wonderful (I think it was featured on “American Playhouse”). There are no gonzo space aliens, planetary collisions, remembrances of the bombing of Dresden in World War II or felt-pen-tipped pictures of human body parts, just two people struggling to express themselves and doing so in a local stage production of “A Streetcar Named Desire,” interestingly enough.

And for someone whose work broke all kinds of literary boundaries and took the reader into a sometimes dizzying array of real and imaginary locales, Vonnegut (as is typical for any accomplished artist, I think) was concise when speaking or answering questions in interviews about all manner of topics, including world events (and I’m sure I don’t have to tell you what he thought of Dubya, The Boy King).

So let’s raise a glass to the passing of a true literary giant and tortured soul. Here’s hoping he has found the peace and resolution he sought through his writing, a great legacy he has bestowed upon us for all time.
Posted by doomsy at 12:22 PM