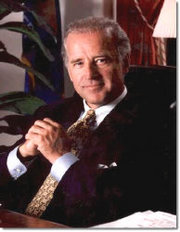 Sometimes, the "Senator From MBNA" nails it, as he did in this morning's Inquirer.

Protect our infrastructure now
The administration has no plan for fighting terrorists on American soil. Here's a start.

President Bush has put huge efforts into chasing terrorists around the globe, but he has no plan for fighting them on our soil. Two months ago, the bipartisan 9/11 Commission flunked his administration on its homeland-security preparations, saying it's time "we stop talking about setting priorities and actually set some" to protect our trains, ports and other infrastructure.

Last week, in his State of the Union address, the President had the chance to lay out a plan. He said he has "authorized a terrorist-surveillance program to aggressively pursue the international communications of suspected al-Qaeda operatives." In a word: wiretaps.

Everyone is for intercepting calls from al-Qaeda. But eavesdropping is not a nationwide security strategy. He is approaching this the same way he prepared for Hurricane Katrina. His lack of preparation didn't work there, and it won't work here.

Our infrastructure needs protecting. Every day, millions of people pass through train stations. Every day, 90-ton rail tankers filled with deadly chlorine gas roll unprotected through neighborhoods. If one were attacked in an urban area, 100,000 people could be killed or injured. But, astonishingly, the commission has discovered that the administration is willing to let another year go by before it starts to tighten things up.

Police, fire and rescue units still cannot communicate with each other or with federal agents. We haven't consolidated terrorist watch lists to ensure that known terrorists will be caught whether they are trying to board a plane, get a student visa, or get stopped for speeding. Checking airline baggage for explosives - the one area where you would expect action - has, in the words of the 9/11 Commission, "not been made a priority."

We must take immediate action. Following the State of the Union address, I proposed a measure to bring up the grades on our homeland-security report card. It would provide $41.97 billion over the next 10 years to improve on those areas where we received a "D" or "F" from the bipartisan 9/11 Commission, and it would provide critical funding for other areas where security is lagging.

The measure could be paid for by closing tax loopholes, including those that allow corporations to use abusive tax shelters (such as leasing foreign subway and sewer systems, $34 billion savings); that let oil companies avoid taxes on foreign operations ($9 billion); and that withhold taxes on government payments to contractors like Halliburton Co. ($7 billion). Ask Americans: Would you rather spend money securing ports or for wasteful tax loopholes? They would say: Make our ports safer.

Here are the steps I've proposed and that the President should take:

First, provide more funds to add local law enforcement personnel. Two-thirds of the country's largest police agencies are facing officer shortages. Unbelievably, the President's response has been to kill the one program that helped local agencies hire officers. It won't be a Marine with night-vision goggles who stops the next attack; it will be a local police officer who happens to be in the right place at the right time.

Second, give first responders reliable communications equipment that allows them to talk to one another. Good communication is crucial to all emergency situations - including natural disasters. We have drastically underfunded this effort, and I fear we will pay for this penny-wise-and-pound-foolish approach.

Third, develop a plan for rail and transit security. Last summer's attack in London showed how vulnerable rail systems are. We have done virtually nothing to upgrade our defenses. If we will simply do the basics - increase police presence in stations, add canine patrols to sniff for bombs, improve security fencing and lighting, and install closed-circuit cameras - we can greatly increase security.

Fourth, expand our use of new technologies, including machines that screen air cargo for explosives and examine shipping containers for radioactive material. We should integrate our terrorist watch lists and improve information sharing among agencies.

Finally, invest more funds and enforce tough regulations to better protect the systems we rely upon most: our electricity grid, computer networks and chemical plants.

The Bush administration should be embarrassed by the grades it received. Business as usual is no longer acceptable. The President needs a plan to achieve marks that will make the American people proud - and safer.

I'm still plenty steamed at him and Carper for caving on the bankruptcy bill, and Biden looked like a whining baby after the Alito hearings. But on this issue, it is a gross understatement to say that the Dems need this kind of leadership.
Posted by doomsy at 10:24 AM