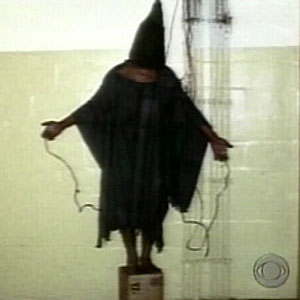 As long as we’re in sort of a humorous vein today, I guess I might as well keep things “light and breezy” by making us revisit the Abu Ghraib prison scandal.

I’m doing this because the Bucks County Courier Times, exceeding its usual standard of wingnuttery, published a column a couple of days ago from Dr. Earl Tilford of Grove City College. In it, he attempts to draw a comparison between something that approximates Bible-belt religious zeal and the fundamentalist crazies who are trying to kill us.

I say that the paper exceeded its usual standard because, in the process of reflecting on all of the murderous images we have witnessed to date from Bushco’s war for oil and expansion of dominion, Tilford (to whip us into a good fit of lizard-brain-induced fear and illogic, I’m sure) recalls a conference in Princeton, NJ (automatic tip off of some traitorous, commie liberal activity by mention of that location, right?) that his denomination participated in last month where a professor referred to “the images of unforgettable horror at Abu Ghraib.” This was Tilford’s response:

Professor, a guy tied to a bed wearing woman’s panties on his head or a pile of naked dudes with bags over their noggins and a female soldier draped over them are fraternity and sorority initiation pranks…not “unforgettable horror.”

Oh…so you consider what transpired at Abu Ghraib to be “pranks,” Doctor? Something akin to a joke, I suppose?

I would ask that you read this and try to imagine how you would feel if, in the event that you were captured or tortured also, those holding you captive defiled religious icons of importance to you or made you undergo something that otherwise made you feel contaminated spiritually. I somehow doubt that you would consider it to be a “prank.”

Or read this account from Seymour Hersh in The New Yorker that outraged the world, particularly this excerpt (partially repetitive, I admit):

The photographs tell it all. In one, Private England, a cigarette dangling from her mouth, is giving a jaunty thumbs-up sign and pointing at the genitals of a young Iraqi, who is naked except for a sandbag over his head, as he masturbates. Three other hooded and naked Iraqi prisoners are shown, hands reflexively crossed over their genitals. A fifth prisoner has his hands at his sides. In another, England stands arm in arm with Specialist Graner; both are grinning and giving the thumbs-up behind a cluster of perhaps seven naked Iraqis, knees bent, piled clumsily on top of each other in a pyramid. There is another photograph of a cluster of naked prisoners, again piled in a pyramid. Near them stands Graner, smiling, his arms crossed; a woman soldier stands in front of him, bending over, and she, too, is smiling. Then, there is another cluster of hooded bodies, with a female soldier standing in front, taking photographs. Yet another photograph shows a kneeling, naked, unhooded male prisoner, head momentarily turned away from the camera, posed to make it appear that he is performing oral sex on another male prisoner, who is naked and hooded.

I think the question we have to ask is this (posed by Maureen Dowd and others): What exactly are we trying to accomplish?

Are we trying to obtain some kind of credible information that we can use to fight the enemy in Iraq, Afghanistan and elsewhere (and never forget, by the way, that they WOULDN’T EVEN BE IN IRAQ if we hadn’t blown the place all to hell without something that approximated post-invasion planning)? OK. Well then, why don’t we isolate these people, or (and HERE’s an idea) try giving them some other motivation to cooperate?

Maybe it’s possible that the vast majority of these nut cases who want to blow themselves up and take us with them will never come around. I’ll grant you that. However, I don’t care what someone’s affiliation is…we are all materialists at heart, whether we want to admit it or not. That’s a very slim thread, if you will, to hang onto in this, and I’ll admit it. However, the prisoners at Abu Ghraib and Guantanamo Bay will have NO MOTIVATION WHATSOEVER to want to work with us or cooperate if all we do is torture and humiliate them (to say nothing of the inconvenient fact that it VIOLATES THE GENEVA CONVENTION anyway!). It will radicalize (and no doubt, has already) people who were “on the fence” who we should be trying to win over in this.

Doctor Tilford, I would respectfully submit that a good, Christian man such as yourself should consider this before you once again speak with some kind of assumed moral authority in this that we partially lost by our own monstrous conduct. We must fight fiercely, of course, but we must fight wisely also, with the full understanding that we must do so in compliance with teachings and faiths of people throughout the world who would fight with us.
Posted by doomsy at 2:46 PM