Taking The Fight To Dubya 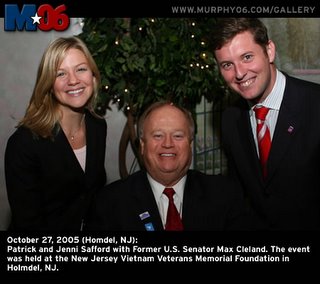 While he crows about thwarting a supposed terrorist strike in Los Angeles that nobody seems to know anything about (and by the way, numbskull, it's the "Library" tower), some Dems running for Congress who have fought for real gathered in Washington yesterday.

Among them was Patrick Murphy, and here's more on our own 8th district "Fighting Dem" (from phillyburbs.com)

A generation ago, three of every four members of Congress had served in the military. Today, barely one in four has - a statistic Patrick Murphy aims to change.

Murphy, an Army lawyer who served in Iraq for seven months and practices with Cozen O'Connor in Philadelphia, is one of at least 11 Iraq and Afghanistan war vets running for Congress across the country, 10 of whom are Democrats. He's one of three candidates seeking the Democratic nomination for the 8th Congressional District, a seat held by Republican Michael Fitzpatrick.

A new political group, Band of Brothers, which supports Democratic veteran candidates, says 56 military veterans are running for Congress this year as Democrats. On Wednesday, Murphy joined many of them in Washington, D.C., for a rally on the Capitol steps.

They share a dislike for the war in Iraq but differ on how to handle it. Some, like Tammy Duckworth, running for Illinois' 6th District, say the United States should have put more resources into pursuing Osama Bin Laden, rather than invading Iraq. Still, she doesn't advocate an immediate withdrawal.

"It wouldn't be in our national interest to leave Iraq in chaos and risk allowing a country with unlimited oil wealth to become a base for terrorists," Duckworth says on her campaign Web site. She lost both her legs and shattered her right arm after a rocket-propelled grenade struck the cockpit of the Black Hawk helicopter she was co-piloting on Nov. 12, 2004, north of Baghdad.

Other Democrats, including Murphy, say they would pressure President Bush for a quick end to the war.

"I would demand that the president actually give us a plan to bring the troops home this year," Murphy said.

That would mean all troops, except for a strategic strike force based in Kuwait that would be available to help the new Iraqi government, he said.

The National Republican Congressional Committee is downplaying the significance of the Democrats' surge in veteran candidates.

"Rather than influencing the party, more often than not, they are adopting the Democratic Party's surrender message," spokesman Ed Patru said Wednesday. "There's only two positions on Iraq. There's finish the job, and there's the surrender message, leaving before the job is done."

Patru said his party has 38 congressional candidates with military experience, but "we don't broadcast it." He argued that Democrats are making a concerted effort to recruit veteran candidates to offset the party's "credibility gap" on national defense.

Democratic Congressional Campaign Committee spokeswoman Jen Psaki disputed that, saying the veterans' campaigns grew of their own accord.

Murphy said his conscience led him to enter the race after he returned from his deployment overseas.

"I was a witness to our failing foreign policy in Iraq, and when I came home, I saw it wasn't just Iraq," he said. "This administration has not looked out for average American families, with its tax breaks for the wealthiest 1 percent and making it harder for folks like myself to go to college, when they cut educational benefits."

Murphy, 32, credits his military training with honing leadership skills that he says will help him make the tough decisions needed in Congress.

After attending Bucks County Community College, Murphy transferred to King's College in Wilkes-Barre and joined the Army ROTC program. He graduated in 1996 with a double major in psychology and human resources management and was commissioned as a second lieutenant in the Army.

He graduated from law school in 1999 and began his active duty service in the Army's Judge Advocate General Corps. He spent five months in Bosnia in 2002 and was sent to Baghdad in June 2003.

Murphy also has taught law at West Point and was a paratrooper with the 82nd Airborne Division.

By the end of December, he had $147,527 in his campaign coffers, reported to be the most of any of the Democratic Iraq veteran candidates. His Democratic opponents in the race have raised much less. Former Bucks commissioner Andy Warren had raised more than $38,000 while retired management consultant Fred Viskovich had nothing to show in campaign expense reports filed last month.

Thanks to (sssshhhhhh...) for the information.

And speaking of our military, how's this for "supporting our troops" from Bushco?
Posted by doomsy at 8:21 PM