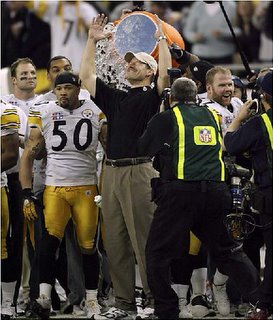 Congratulations to the Pittsburgh Steelers for winning the Super Bowl yesterday. I’m happy for former Eagle Bill Cowher and a team with a great tradition of winning. I was particularly glad to see this happen also for the sake of Jerome Bettis, Hines Ward, and Duce Staley. I had a feeling this might happen after Denver knocked off New England earlier (REALLY hard for a rooting interest in THAT game) and Pittsburgh wiped out Denver soon after that.

With that having been said, I should also point out that I saw very little of the game (though I was around for Willie Parker’s great 74-yard TD run). This is because I find it very hard to deal with the fact that the commercials and the entertainment are a priority for the event as opposed to the actual athletic contest itself. The ratio, when I managed to watch, was about three minutes of game versus five minutes of commercials. That’s ridiculous.

I also have a problem with the utter pomposity of the NFL anyway. Commissioner Paul Tagliabue gave what he called his “State Of The Game” speech during the two weeks between the divisional championship games and the Super Bowl, timed to coincide somewhat with the “State Of The Union” address, a circumstance for which I believe the phrase “massively full of oneself” was invented. Also, I believe this was the fortieth time the game has been played, but I’m just guessing. The whole “roman numeral” thing is, as far as I’m concerned, another symptom of what I just described.

Also, speaking of the two-week interval before the game is played, I think they should get rid of that and make it one week only (a long shot, I know). There is ONE REASON ONLY why there is a two-week interval, and that is to create so much hype and nonsense that you end up saying “Dear God, please let this end so they can play this bloody game and be done with it,” which is exactly what the NFL wants.

Actually, we entertained some people we hadn’t seen for awhile yesterday, and believe it or not, we had such a good time that we didn’t want to ruin it by turning on the game. Of course, I guess we should have caved in to the instincts of gluttony and massive consumption and done so, obsessing on every possible obscure detail of the game and the way it was presented, but silly us…we just said no (even though the game, happily, was telecast on ABC and NOT FOX!!).

And gee…I would say we’re just A LITTLE BIT HYPER-SENSITIVE at ABC (as well as massively hung up and anal retentive anyway, largely because of the illustrious FCC) if we’re bleeping non-profanity from a 62-year-old rock star. So Mick Jagger isn’t allowed to sing, “You make a dead man come,” is he? Well, I have news for you. That lyric was originally written by Tom Waits anyway (the legacy of Janet Jackson’s 40-year-old, diamond-studded, exposed African American boob lives on). Also, something else Jagger sang of a mildly political nature was bleeped also (our Great Father Dubya wants nothing but his pabulum in our warm milk, remember people?).

Update: Never mind...Brendan set me straight on the "Rough Justice" and "Cocks" thing. I guess somebody "set the wayback" for Victorian-Era England when we weren't looking.

One final note: with all of this having been said, it should be pointed out again that the game featured two teams who have done very well in an area of offense neglected by the hometown “Iggles”.

So, Andy Reid, if somehow you are reading this, I have two words for you:

Running Game!
Posted by doomsy at 8:39 AM