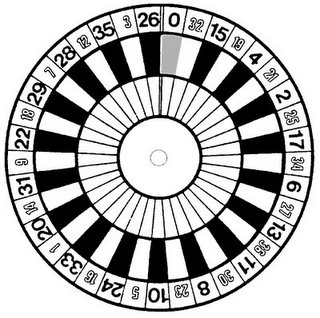 “Step right up and give this baby a ride. Stop on the red for Repug-approved right wing propaganda. Stop on the blue and get filtered and reasonably sourced information with occasional lefty nuttiness. Stop on the orange to find out the sex of Brad and Angelina’s baby.”

What the hell am I talking about? Good question.

It seems that the Inquirer’s political analyst Dick Polman wrote another “What’s Wrong With The Dems” column today (registration required), though I have to admit that he did his homework, talking to a lot of the right people, including David Sirota and referencing Chris Bowers. However, I get the impression that Polman took the most incendiary quotes he could find to make his case. Still, though, he raised many valid (though unfortunate) points.

However, he couldn’t resist “taking a spin over to the red area,” so to speak, with this remark:

Some Democrats want to paint Republicans as the corrupt pals of special-interest lobbyists - Democratic chairman Howard Dean likes this tactic - but others think the issue is a yawner for most Americans, who recognize that Democrats aren't pure either (Senate Democratic leader Harry Reid took Indian casino money, too).

Putting aside the fact that it’s often a self-fulfilling prophecy to write “Most of the American people think…” about something, especially if it’s negative, thus feeding into the cycle of negativity even more, it should be noted that IT IS NOT ILLEGAL to accept campaign donations from Indian casino operators UNLESS THEY HAVE BROKEN THE LAW. It looks bad (at a minimum) for a politician to accept a donation when legislation affecting the donor is involved…at a maximum, it could be a felony.

However, there’s a big difference between taking money from Jack Abramoff and doing so directly from an Indian casino operator, and Polman totally compromises himself when he “muddies” the two of them together like that.
Posted by doomsy at 12:24 PM