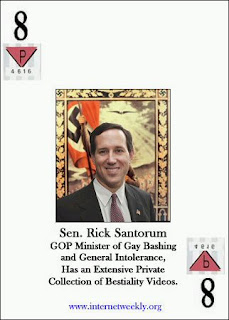 It looks like Senator Man-On-Dog has returned to his regular schedule for concocting his “Elephant Poop In The Room” column.

You can also call them violent extremists if you like, but never use jihadist or mujahedeen or Islamo-fascist to describe our enemy. These words are deemed pejorative and offensive, according to a recent Bush administration memorandum to federal employees whose jobs involve explaining our ongoing war to the public.

Gosh, I’m so glad Little Ricky cleared that up, aren’t you? Why, I’m sure this has already been propagandized about, oh, I don’t know – maybe a few hundred times already??!!

And our former senator also communicates that he encouraged President Highest Disapproval Rating In Gallup Poll History to stop using the word “terror” (which, as far as Ricky is concerned, is only a means to an ends) and instead used the term “Islamic fascism” to connote what we’re truly up against.

Also, our hero has the following sad news…

In speeches I give across the country, I ask basic questions about the ideology and motivation of the enemy. The response? Blank stares. Seven years into this war, that's an indictment of our government rather than the intelligence of the public. Why should we learn about radical Muslims if they are not the problem?

He’s actually right about our government’s failure to properly communicate what the true enemy is all about and why there are plenty of fundamentalist nut jobs out there who want to blow us up along with themselves. The problem is that if Little Ricky were to actually pursue that line of reasoning seriously, he would be forced to admit that our ongoing occupation of Iraq is the single biggest reason why these people want to kill us (we leave, and that removes a powerful incentive for new recruits to join al Qaeda and groups with similar inclinations against us).

And why should be expect such insight from someone who has referred to President Clueless as “Lincolnesque” here, as well as predicting another terror attack within a year (dated last July here…we still have a couple of months to go; let’s hope and pray he’s wrong).

Oh, and did I also note that former Senator Scumbag, along with former House Intelligence Committee Chairman Pete Hoekstra here, proclaimed that “we found the WMD” in Iraq in the form of leftover chemical munitions, even though Bushco’s Iraq Survey Group stated that all such WMD-related stockpiles were destroyed in 1991? And do you really want to take the word of someone who said that the mythical “Eye of Mordor” was on Mesopotamia here?

As I and others have said repeatedly, there is a legitimate battle to be fought against a very real enemy, but we must do so with courage, resolve, common sense, and through respect of and adherence to international laws and protocols. Demagogic name calling and a trite, oh-so-worn-out preoccupation with labeling won’t accomplish anything except to enlist ever more people against us.

And I have a question, by the way; as many times as Santorum has been utterly wrong on this issue as well as many others, at what point does his “squawk box” get taken away from him once and for all?