A Betrayal In Victory From Another Era

I had planned to post on yet another episode today of Incurious George lambasting Congress while we sink further into oblivion (I honestly wonder sometimes why any of the three current principals want to be president, considering the mess they will inherit from this clueless narcissist and his gang of pirates), but I came across this item today from Der Spiegel that I thought was much more interesting.

It tells the story of Yevgeny Khaldei, a lieutenant in the Soviet Navy during World War II, who also photographed the image of the hammer and sickle flying over the Reichstag in Germany after it fell to the invading Russian Army on May 2nd, 1945.

As the story tells us…

Khaldei used up an entire roll of film, shooting 36 photographs. Various versions of one of (the photos) became an icon of the 20th century. It was an image that came to symbolize the defeat of Nazi Germany and the Red Army's victory in both the German and Russian collective memories.

After the war Khaldei became the victim of anti-Semitism in Stalin's totalitarian empire and fell into oblivion. It was only in 1991 that the Berlin artist Ernst Volland came across these photographs by chance in Moscow and decided to publish them in a book. On May 8, the anniversary of the end of World War II, Berlin's Martin Gropius Bau museum is opening a Khaldei retrospective, highlighting the work of the most important photojournalist of the Soviet era.

The exhibition will show photographs from the "Great Patriotic War" -- the Red Army's conquest of Sofia, Bucharest, Budapest and Vienna, the Potsdam conference and the Nuremberg trials. It will also feature photographs of everyday life in the Soviet Union, from before and after the war.

As the story tells us, one of the reasons why the photo of the flag was doctored so much is because the Red Army soldier flying it was wearing wristwatches on each arm that he had stolen during the looting after the Reichstag fell.

How ironic that Khaldei, a Jew, photographed an image of the defeat of one empire built largely on anti-Semitism only to fall victim to it on behalf of his own country.

But of course, we here in the U.S. don’t know anything about staging or doctoring photos during wartime for propaganda purposes… 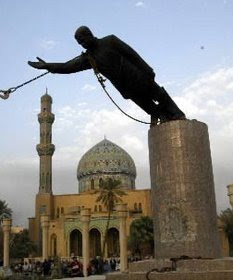