Does “Don Vito” McCain Have An Offer? Would We Refuse? 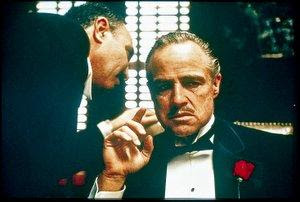 Gosh, I’m shocked to hear that “Senator Honor And Virtue” has such as low opinion of the U.S. Congress (as noted here - sticking with the Times)…

On his campaign bus, Mr. McCain said he was confident there was enough wasteful spending in Washington that he would be able to find cuts to offset the programs he would want to keep.

He used a colorful analogy to make the point that while good things can come out of a bad process, they do not excuse it. “The Mafia does good,” he said. “There are some projects that the Mafia’s engaged in that do good. I will accept that. I will accept that sometimes a godfather helps the ailing child of a member of the Mafia.” But he added that the ends do not justify the means. “I can’t give you a justification for the Mafia,” he said. “I can’t give you a justification for the corruption that’s been bred, which has sent members of Congress to federal prison.”

Now watch and see if McCain is vilified for this as much as a certain senator from Illinois running for president has been pilloried over his association with a certain preacher; besides, when it comes to “members of Congress (in) prison,” I know of Jim Traficant, Duke Cunningham and Bob Ney, so my score is Repugs 2, Dems 1.

But of course, if that “straight-talking maverick” knows of any others, we’ll take him up on whatever he’s got, won’t we (a reference to the post title).

And in other moments of McCain fluffery, we have this from a recent campaign stop…

Air Force veteran Clif Sams told McCain that he had done a “damn good job” surviving his imprisonment during the Vietnam War. He then told the senator: “I hope that we have somebody called Swift Boats for McCain come out and help you. You’re damn good.”

“Thank you sir, and thank you for your service,” McCain responded.

In 2004, McCain vigorously defended John Kerry against attacks from “Swift Boat Veterans for Truth,” a group which sought to undermine Kerry’s Vietnam war record. At the time, the Arizona senator called the ads “dishonest and dishonorable.”

Asked why McCain had not had a similar reaction to Friday’s "Swift Boats for McCain" comment, campaign spokesman Steve Schmidt said the senator had repeatedly staked out a “clear position” against third-party groups, and "the only 527 activity is against us."

Spoken like a true member of the cult of Karl Rove, as noted here.

And BarbinMD of The Daily Kos has more here for members of our corporate press who, apparently, are bored with their stenography on behalf of the presumptive Repug nominee (it would be funny if it weren’t so pathetic).

(And by the way, "Tweety" found a nut here from last Friday - a BIG one - and Frank Rich notes John W. McBush's own "preacher problem" here. - but since there's still nothing on Rod Parsley, allow me to oblige once more.)