Welcome To The Party, Joe 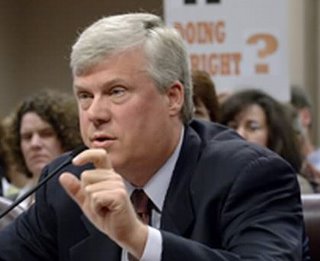 (I mean that figuratively, though I wouldn’t mind meaning it literally either).

It seems that our former Repug PA State Senator Joe Conti, and now CEO of the PA Liquor Control Board (a PA Commonwealth “thing” – kind of a long story for the uninitiated), will attend a $1,000-per-person fundraiser/policy discussion at The Brick Hotel in Newtown, PA on Monday, which will be the first meeting of “The Congressional Policy Group,” individuals who will provide input to Patrick Murphy on a wide range of issues.

Now I know some people in these parts (probably quite a lot) are still PO’ed at the circumstances under which Conti became CEO of the board, bypassing highly qualified individuals such as Jonathan Newman, who stepped down as LCB chairman in January. And only Ed Rendell and Conti know if it truly was a reward on Rendell’s part for Conti’s support of casino gambling in PA.

But as I asked once before, how much could Conti have made outside of government instead? And was it worth it to lose his expertise in the process?

And of course, the Phillyburbs story features Mikey Fitzpatrick whining that Conti’s participation in the meeting on Monday is “disingenuous.”

The funny part about this is that, if Fawkes had gone along with the recommendation of former U.S. House rep Jim Greenwood and endorsed Conti for the PA-08 seat in 2004 instead of Mikey, Conti would probably still be serving, since he is a real moderate in a district that recognizes and values that and Mikey was a fake one and, in point of fact, a conservative who took his marching orders directly from Washington and the NRCC.

And one more thing, Mikey; be a man and hurry and declare again for the PA-08 seat next year. It will be so much fun to beat you all over again.
Posted by doomsy at 11:33 AM