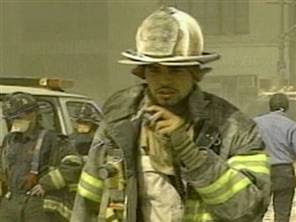 Today’s Philadelphia Inquirer tells us that Department of Homeland Security Secretary Mike (“City Of Louisiana”) Chertoff came to town to help publicize the need to identify improvised explosive devices (IEDs, an acronym our troops serving in Iraq know only too well) that could be used in terrorist attacks on our cities.

As the story by reporter Jennifer Lin tells us…

At his stop in Philadelphia, Chertoff was joined by (Philadelphia) Mayor (John) Street, Police Commissioner Sylvester M. Johnson, and Fire Commissioner Lloyd Ayers. After Sept. 11 and Hurricane Katrina, Street has made improving the city's emergency preparedness a priority.

He told Chertoff he was "grateful" for money that the federal government had given Philadelphia to improve its readiness but later added that it wasn't enough.

The Philadelphia region, including the surrounding suburbs, is receiving $18 million in grants from the Department of Homeland Security this year.

If a bomb went off inside the city's transit tunnels, first responders would not be able to communicate. To fix the problem would cost about $30 million, Street said.

I have to give Chertoff credit for trying to help identify bomb threats (and I hope he consulted with some of our military on this since they would be intimately familiar with this, but then again, we’re talking about Mike Chertoff here, so don’t assume anything).

However, Street hit on what I believe is the much bigger issue, and that is communication among first responders at the local, state, and federal levels in the event of an attack.

This article tells us that Chertoff has “mandated interoperable communications” among first responders for our 35 most “at-risk” cities by the end of this year, though this sounds more like a press release than an actual plan to accomplish anything (any word on how that is coming along, by the way?).

Today, the federal government lacks an aggressive plan to force significant change. A series of complicated hurdles -- financial, political and technological -- have blocked progress on first-responder communications systems to the extent that it could take years and tens of billions of dollars to overcome them.

For example, those communication systems operate on as many as 10 different radio bands and, in some cases, rely on 30-year-old equipment never meant to interact with radios produced by rival manufacturers.

Not least of the complications is the reluctance of Republicans in Washington to impose a federal solution on state and local officials. As a result, however, each side of the government divide is looking to the other for solutions, and neither is able to deliver.

I wonder if we’ll all still be standing around arguing about “states rights this, states rights that” one day after one or more of our cities are burning to the ground from another hit by al Qaeda? God willing, I’ll never have to find out.

Certainly, there are those who laud the federal government's deference to local and state government officials setting their own homeland security priorities; they point out that communications is only a cog in the vast machinery of preparedness policy and resources.

But no one disputes that sound communications are essential in coping with large-scale disasters. A U.S. Conference of Mayors survey last year of 192 cities offered some starkly bad news on the communications front.

There were some improvements, to be sure. About 77 percent of the cities reported that they had linked their police and fire communications systems. Two-thirds of the cities reported that they had coordinated police, fire and emergency medical services systems. But the fact that an overwhelming majority of the cities surveyed were unable to communicate with first-responders beyond their city limits is an indication of the scale of the problem before the entire nation.

Money remains the greatest barrier to linking and upgrading first-responder communication networks. Some estimate the cost of implementing a unified emergency response network nationwide at as much as $60 billion. Even conservative estimates dwarf the $1.6 billion in Homeland Department money that local and state governments have spent so far.

Congressional Republicans recently fended off attempts to increase communications spending. During debate in July on the fiscal 2006 Homeland Security appropriations bill, Senate Democrats offered multiple amendments to foster compatible radio systems, including one that would have increased funding by $5 billion.

Judd Gregg, the New Hampshire Republican who chairs the Senate Appropriations Subcommittee on Homeland Security, said first-responders have already received open-ended grant funds they can spend toward that goal if they choose. He said they should be allowed to make those decisions.

See, this is what happens when Repugs are put in charge; by and large, they refuse to govern and pass off the responsibility (and a few Dems are guilty of this too, of course). Just throw the block grant money at the problem and let someone else deal with it, right?

But for something like disaster preparedness, the consequences are something wholly other, of course, way beyond the normal functions of governance. And yes, it is a hugely complicated task, but it’s a hugely important one also.

And how’s this for a “can-do” attitude?

"Given the sheer number of state and local public safety agencies, regional communications implementation simply cannot be managed centrally from Washington," said David Boyd, director of the Office of Interoperability and Communications at the Homeland Department.

So from where you propose to manage them centrally, Mr. Boyd? Fond du Lac, Wisconsin?

Suppose an overland vehicle with a hazmat placard cannot be accounted for in Kansas City, Missouri, but a threat has been identified in the vicinity of St. Paul, Minnesota, and there is reason to believe that the vehicle is en route to that destination. How are the authorities in St. Paul supposed to be notified by those in Kansas City (I know this is a simplistic example, but you know what I’m saying here).

Thank God we didn’t have these people in charge when we were fighting World War II or dealing with other national emergencies.

So yes, trying to enable communication among all parties in the event of a disaster in this country is one of the biggest obstacles we face to ensure our preparedness.

But to get an idea of the consequences of our failure to do so, let’s take a look at these familiar images from two years ago one more time, shall we?