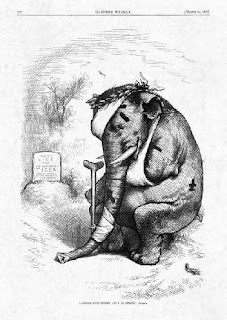 After I pondered some more about the post from Prof. Marcus about the Senate entertaining a resolution to censure MoveOn.org for the ad that the whole world must surely know about by now, I have to admit that I’ve changed my mind.

At first, I thought we should immediately call our senators and tell them to cease and desist. I had planned to contact both Casey and Specter and said they should forget about this.

But you know what? Instead, I think we should let them go ahead and do it.

In fact, I think we should actually call them and encourage them.

Because MoveOn is at fault? Of course not.

I think we should encourage them because it would send a clearer signal to this country and the world than anything we could muster that they, as a collective body, have no desire whatsoever to stand by our men and women in the military and are such clueless, self-serving pretenders to public office that they would pass a censure resolution against a group with a membership of two million people that dared stand up for those who serve us as opposed to trying as hard as they could with every fiber of their being and breath in their bodies to put an end to this catastrophe by starting to bring our people home once and for all and for good right now!

This to me is starting to take on a similar dynamic as the Terri Schiavo madness in 2005. The Repugs see a chance here to get “the base” all in a froth and are milking this for all it’s worth. The only trouble is that the Schiavo mess backfired on them and marked the beginning of the end of their ascendancy; Katrina followed a few months later, and between that and this country finally focusing on the quagmire of Iraq, things have never been the same for them since.

And now, I think they’re trying to replicate what they think will be the Schiavo effect (looking for a positive outcome that won’t be there now or ever) with this stupid ad business. And as I said, the Schiavo gambit backfired because the country was repulsed by their antics. And I think it will be again if they proceed with this censure motion.

So tell them to go ahead (and just for good measure, give a citation to Freedom Crock while they’re at it for “service to our country”). It will serve them right when it blows up in their face (and if some chicken Dems get burned by it also, oh well…).
Posted by doomsy at 11:01 AM