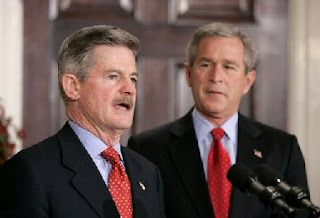 So another member of Bushco leaves us…

Jim Nicholson was typical of Republicans appointed to oversee agencies who had no business doing so; his claim to fame for this regime (as noted here) was that, as head of the RNC from 1997-2000, he left the committee with money in the bank and a surplus of 160,000 on the voter list.

And as also noted in the prior post (but expanded in a considerable way by Joe Conason here), Nicholson was one of the early deriders of Al Gore for speaking out about the climate crisis, with Nicholson saying the following about Gore’s book “Earth In The Balance”: “This is a book written by an extremist, and it’s filled with extremism …. He wants to do away with the automobile as we know it today…”

Well, fortunately for us all, we can “do away” with Jim Nicholson running the Veterans Administration; here’s hoping the next person in charge won’t be responsible for losing the social security numbers of 26 million veterans.

I know it’s too easy, but I have to say it: Heckuva Job, Jim!

Update 7/18: Dick Polman also noted the following in this post...

In the spring of 2005, Nicholson publicly admitted that the VA had underestimated the number of Iraq war vets who were expected to seek medical treatment that year – by nearly 80,000, because somehow his agency hadn't taken the growing Iraq caseload into account. Records show that the VA was slow to react when casualties mounted far beyond their initial expectations; the disability claims backlog reportedly exceeds 400,000. Meanwhile, for fiscal 2006, Nicholson approved bonuses to top VA executives, totaling $3.8 million. This spring, he dismissed reports of widespread vet treatment shortfalls, calling them “anecdotal.” In his words, “when you are treating so many people there is always going to be a linen towel left somewhere.”

I'll withhold comment regarding the rest of Polman's post about the Senate and Harry Reid's all night session - when all you have to grasp at are straws...
Posted by doomsy at 11:28 AM