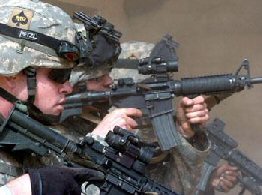 It is a particularly cruel irony that the news of missing Social Security numbers for about 26 million veterans has broken so close to Memorial Day weekend.

In the past, Dubya has proclaimed himself “the CEO President.” Can you tell me what organization would permit such a catastrophic security breach and still allow those responsible to keep their jobs?

I already hammered on “Abu” Gonzales for waiting 19 days to report this (I’m typing these words and they’re still totally astonishing to me). However, the person who should bear the brunt of the blame for this is the head of the Veterans Administration, Jim Nicholson.

I’ll show a little more respect towards Nicholson than I would to other Bushco stooges such as Rummy, Margaret Spellings, Alphonso Jackson, Mike Leavitt, Mike Chertoff, John Snow, Gale Norton (yes, I know she’s gone, but her replacement Dirk Kempthorne is “cut from the same cloth”),etc. because Nicholson served for 22 years in the Army Reserves as a ranger and a paratrooper.

However, it should be pointed out that Nicholson ended up in the Bush Administration because he knew how to make money (naturally), becoming a lawyer and a successful home developer. He also led the Republican National Committee from 1997-2000 and left the committee with money in the bank and an expanded voter list of more than 160,000 names.

Nicholson also achieved a level of partisan infamy with me when, as RNC head, he attacked Al Gore during the 2000 election for Gore’s words on global warming (as others have pointed out, the Repugs successfully foisted the sickening narrative that Gore was pedantic, wishy washy and a bit deceitful, while Dubya was “a regular guy”). Joe Conason explains...

Indeed, Mr. Gore became a safe, easy target for every Republican politician and every right-wing commentator, who brandished Earth in the Balance as if it were The Communist Manifesto. “This is a book written by an extremist, and it’s filled with extremism …. He wants to do away with the automobile as we know it today,” complained Jim Nicholson, then the Republican national chairman (and now the Secretary of Veterans Affairs).

But what about Nicholson's record as an administrator (after all, do you even need to ask with this bunch)?

According to The New Republic:

In contrast to the four most recent VA heads--who had previously held leadership positions with Disabled American Veterans, the Department of Defense, a state-level VA department, and VA itself--Jim Nicholson brings a refreshing lack of experience to veterans' advocacy (note: this is a decidedly tongue-in-cheek remark...)

In Bush's first term, Nicholson was rewarded with the ambassadorship to the Holy See. But he traded vespers for vets last February, joining his brother John, who was already head of the National Cemetery Administration. In June (2005), he admitted that VA had underestimated the number of veterans who would be seeking medical treatment this year by nearly 80,000 because it had failed to take into account the surge in enrollment by veterans of the Afghanistan and Iraq conflicts--13,700 of whom have suffered blown-off limbs, bullet wounds, and the like. The miscalculation was a surprise to Congress, since Nicholson had written on April 5: "I can assure you that VA does not need [additional money] to continue to provide timely, quality service." Republican House Appropriations Committee Chair Jerry Lewis said VA's failure to identify the problem and notify Congress earlier "borders on stupidity."

I think Nicholson is basically a good man, and it should be noted that the person who took the confidential data was an operative in the VA and not Nicholson himself (still, how that was allowed to happen is puzzling in the extreme). And I believe that Nicholson is genuinely aggrieved by this (he damn well should be at the very least).

However (and I apologize because I know this is a broken record with this bunch), this is what happens when you appoint people to jobs in government who don’t like government, don’t know how government works and, in all probability, have no interest in learning about it.

As awful as George W. Bush is as a president, the people beneath him are also bad at their jobs also to varying degrees. I can think of very few people in his cabinet who should be remaining at this point.

And how all of them sleep at night is something I will never understand.
Posted by doomsy at 9:24 AM