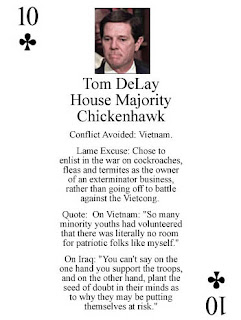 The Inquirer also allowed itself to serve as Tom DeLay’s PR vehicle in this column by Dave Boyer of the editorial board today, noting DeLay’s appearance Monday night at the National Constitution Center in front of an audience of 200 people who, shockingly, had nothing whatsoever better to do with their time. And since we’re talking about DeLay, you know he wouldn’t have bothered to show up unless he could make money for himself.

DeLay appeared at a fundraiser where he also hawked his book No Retreat, No Surrender (how dare he use the title of a Springsteen song!), and also invoked the Hillary-Clinton-as-President boogeyman in an effort to scare the audience into contributing larger donations (which Boyer actually noted, by the way).

Actually, DeLay’s book really should be titled “No Church-State Separation,” since that is what he advocated on behalf of his fellow travelers at the Family Research Council here, or “No Overturning of My Redistricting Scam,” since that is what happened and led to the election of Dem Ciro Rodriguez over longtime Repug Henry Bonilla in Texas’s 23rd Congressional District (noted here).

And speaking of Hillary Clinton, the Inky also printed an odious Glenn McCoy cartoon today (redundant?) where a pollster is asking a couple with a baby in a stroller if they’d “would like to see the Clintons back in the White House,” and the mother says, “Sure, if they return all the stuff they stole when they left.”

I would ask in response that you read this story, particularly the following summary..

(In the investigation into the alleged theft and vandalism) The White House made 78 staffers available for interviews with the GAO, and clearly spent an enormous amount of energy just to try to stick another scandal to the Clintons. (Gonzales' time alone, billed by the hour, might cost more than the $9,000-plus the GAO blamed on the Clintons.) After 11 months, and an investigation that Democrats told the Washington Post cost $200,000, one somehow expected more. Now that all the facts are in, it seems pretty clear which administration should get the blame for the White House vandal scandal.

What a shame that Trudy Rubin’s fine column on Bushco’s insipid attempt at trying to broker an Israeli-Palestinian peace accord was buried beneath all of this muck.
Posted by doomsy at 10:55 AM

if you want to read total moronism, read this raw story article on delay's talk before college repubs... the man is a complete idiot...