The Writing Is On The Wall, Senator 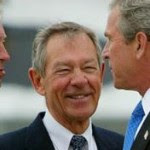 (By the way, I also posted over here.)

Throughout this entire saga of whether or not Congress decided to help the Big Three automakers (and I cannot possibly see how that will happen now), the actions of one person have been of particular interest to your humble narrator, and that is Repug Sen. George Voinovich of Ohio.

As his party dealt what may very well be the death blow to the employment of millions of people all in the name of trying to destroy the UAW, I’ve been trying to figure out how he is going to pull off the balancing act of trying to represent those who will lose their jobs and saving his political hide at the same time.

With that in mind, I found the following statement at his web site (here)…

“There are millions of hard-working Americans tonight who are worried about their jobs and providing for their families. And tonight, Congress failed them. Sen. Levin and I had a true, bi-partisan compromise on the table three weeks ago ready to be voted on, yet it never saw the light of day. The politics need to end before even more companies fall through the ice. Tonight, I am calling on President Bush to use the already-appropriated TARP funds to provide the oxygen needed while they restructure and become healthy and competitive. If we can use the funds for the financial industry, we can use them for the auto industry. We’ve said all along this money was for Main Street and not Wall Street. I think it’s about time we prove it. Time is running out.”

Sounds good for the most part, trying to get Dubya to loose the money here (who, shockingly, actually isn’t the bad guy for a change).

But when you read this story from The Hill dated today, you find this…

“[G]iven the current weakened state of the U.S. economy, we will consider other options if necessary – including use of the TARP program — to prevent a collapse of troubled automakers,” said White House spokeswoman Dana Perino in a statement issued minutes before markets opened.

(New Hampshire Senate Repug Judd) Gregg said White House action would “set a new precedent that the next administration may use to aggressively assert industrial policy and expand government control into numerous specific businesses that are having troubles during these difficult times.”

But Sen. George Voinovich (Ohio), a key GOP supporter of the auto bailout, said it would have been very difficult for lawmakers to reach a deal on legislation. Voinovich preferred from the beginning that the White House directly assist the auto manufacturers, but understood his colleagues had reservations.

"Frankly speaking, my feeling early on was that they [the administration] should have dealt with it through the TARP but they didn't want to set a precedent," Voinovich said.

My, Voinovich sounds positively like a lion when you read the statement from his web site (“Congress failed them,” and “I am calling on President Bush to (give us oxygen),” more or less), but positively kittenish in The Hill article (“it would have been difficult to reach a deal,” and “I understand my colleagues have reservations”).

Senator, if there’s no “last-minute TARP miracle” here to save the automakers (and based on the reactions of Senate Repugs like Bob Corker of Tennessee in particular, who apparently view this as some kind of a political last stand given their justly ill fortunes in the 2006 and 2008 elections, they seem bound and determined to keep that from happening), your constituents aren’t going to blame Congress for the loss of their jobs. They’re going to blame you.

Take a look at this poll from Quinnipiac University, which tells us that…

U.S. Sen. George Voinovich faces a tougher 2010 fight for a third term, with 36 percent wanting to give him another term and 35 percent backing an unnamed Democratic candidate, according to a Quinnipiac University poll released today.

Yes, it’s early, but 36 percent? Do you honestly believe you stand a chance of being re-elected with a number like that?

I’ll cut to it, Senator – if Al Franken pulls it off in Minnesota, that gives us 59 (and the utterly compromised Norm Coleman is suing to stop the recount; oh, we’ve DEFINITELY seen that movie before, haven’t we? And wasn’t it inevitable anyway?). You know the math as well as I do.

Join us, and that gives us 60. That puts an end to the games and the filibustering and the parliamentary antics of people like Corker, Chambliss, Sen. Mr. Elaine Chao, and the whole sorry Senate Repug lot. That puts us on the path of making this country whole again.

Given the Quinnipiac poll I noted earlier, I’ll put it in starker metaphorical (and electoral) terms:

Update: Wow, George, you're a real tough guy, beating up your presidential namesake with the worst approval ratings on record (here); how about some of this scorn for some of your colleagues where it belongs?