Lots Of Idle Time Awaits For An Idle Person 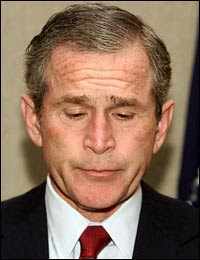 (Definitely not trying to insult a member of Monty Python with that title, by the way…)

I meant to get to this earlier, but Parade Magazine last Sunday included a feature on what ex-presidents earn in their post-presidency here, in which we learn that…

Bill Clinton has earned $52 million in speaking fees since leaving office, and his memoirs brought in $23 million more. George H.W. Bush earns up to $100,000 per speech and was a paid adviser to the Carlyle Group. Jimmy Carter has made millions from his books.

But while publishers have been courting the First Lady, they’ve told President Bush to wait several years before trying to sell a book. He will have a steady source of income, though: Like all former Presidents, he’ll receive a pension (currently $191,000) and money to cover rent for an office, a small staff, and ancillary expenses—paid for with our tax dollars.

Given ex-Presidents’ high earning potential, should taxpayers foot their bills? Yes, says Larry Sabato, director of the University of Virginia’s Center for Politics.

The article goes on to tell us that the biggest expenditure is for secret service protection presidents receive for the rest of their lives; Carter gets the most, and I suppose that’s because he’s traveled more frequently than other former presidents – the fact that Dubya is getting anything is a disgrace; once again, he’s reaping a benefit for something he didn’t earn (and by the way, I have some stuff on Sabato that I want to get to later).

(And I will never begrudge Bill Clinton for any money he makes in his post-presidency, by the way, seeing as how he was practically bankrupted defending himself from the Ken Starr Inquisition during his term in office.)

So what exactly is an ex-executive pretender to do? Well, as noted here from September of last year, a “fantastic Freedom Institute” is in the works for Dubya to bask in the completely imagined “successes” of his term in office.

And it looks like the whole “Dubya complex,” if you will, is moving ahead; this Dallas Morning News story tells us…

Construction of the George W. Bush Presidential Library in University Park won't begin for about two years, but visiting dignitaries may start arriving next autumn for events the president and first lady are eager to launch, the head of the Bush foundation said this week.

Planning for the roughly $300 million presidential facility – which will include a museum, library and policy institute when it opens in summer 2013 – is well under way.

(Mark) Langdale (president of the George W. Bush Library Foundation), who joined the foundation in February, declined to discuss details about how the complex will be designed or situated on the tract of land, on the eastern edge of SMU at Central Expressway. Those are matters under consideration by the design committee, he said.

SMU officials said university facilities will be available to the Bush foundation before the library is built, just as they are to campus organizations.

"Obviously, the campus and our venues are part of what is offered to the foundation and to the library for their activities," said Brad Cheves, SMU's vice president for development and external affairs.

“Obviously” now perhaps, but a little over a year ago, we learned the following from here…

"The placement of the George W. Bush Library and the establishment of an Institute to promote the policies of this president at Southern Methodist University would be a tragedy," said Bishop William Boyd Grove of Charlestown, West Virginia. "The policies of the Bush administration are in direct conflict with the Social Principles of the United Methodist Church on issues of war and peace, civil liberties and human rights, care for the environment, and health care. SMU is a university of the church and is home to one of our outstanding theological seminaries. Its United Methodist identity and its moral authority would be seriously compromised were it to be identified with the policies of George W. Bush in this way."

And the post from last September included a petition to keep trying to make Southern Methodist University a “Bush-free zone,” but apparently that laudable effort was unsuccessful.

And before I forget, this is what I wanted to mention about Larry Sabato: he tells us here that the Swift Boat liars were telling the truth; he tells us here that it would be “a national disgrace” to continue “the Clinton/Bush dynasty” (another idiotic construct as far as I’m concerned; things were a hell of a lot better for me and everyone I know under Bill than under either of the Bushes); and he tells us here that the Democrats are the “mommy” party while the Repugs are the “daddy” party (given all of this, I think Sabato should be automatically disqualified from commenting any further on any matter of concern to the Democratic Party).

Finally, this post from Daily Kos diarist trystero includes some interesting facts on the post-presidential activities of our former chief executives, including Ulysses S. Grant (he wrote a critically acclaimed and financially successful memoir – eat your heart out, Dubya – and toured the world to improve our image abroad), the loathsome Andrew Johnson (who I believe was our only president to serve in the Senate after his term), and the esteemed Thomas Jefferson (who founded the University of Virginia).

As for Dubya, maybe he could try his hand at running an Arena Football League team or promoting an Extreme Boxing match, perhaps wandering through the audience to recreate that whimsical “looking for those pesky WMD” moment in the Oval Office that was such a laff riot at the White House Press Club Dinner way back when.

It would be unwise to expect much more out of him than that.
Posted by doomsy at 9:30 AM