"Absolutely Al" Returns From The Past 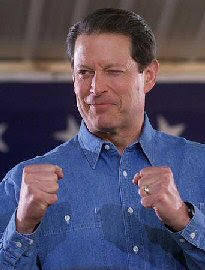 (Note: The “South Park” guys, Trey Parker and Matt Stone, had prepared sitcom spoofs based on either Bush or Gore for the end of 2000 depending on who won the election. Well, given the result, Comedy Central ran their show “Love That Bush” for a few episodes, which actually had some crudely funny moments, and the post title tells you what they would have called the show had Gore gotten in. Now, aren’t you glad you know that?).

I don’t have a lot to say about the former veep endorsing Obama (which is a good thing...some truly hideous troll bottom-feeders in the comments to the MSNBC story, by the way, most of which easily should have been disapproved), but I just wanted to take the opportunity (as long as we’re discussing Gore) to note that I recently viewed the HBO film “Recount” starring Kevin Spacey as Gore attorney Ron Klain.

I read that three authors who wrote books about the 2000 election watched the film to see how authentic it was, and I believe they all approved (including Jake Tapper, who wrote the account “Down And Dirty” read by yours truly). And I learned a thing or two watching it, which I didn’t think I would; I always understood that Gore attorney David Boies made a mistake by agreeing to the December 12th certification deadline, but it turns out that, had he not done that, the Florida legislature would have taken matters into its own hands and (quite probably) certified the electors for Bush anyway.

Actually, “authentic” is probably an understatement when describing the film; even the supporting characters (actors who briefly portrayed Bush and Gore in key moments, as well as Jeb Bush) are all authentic; actually, given the vast array of major and minor players in the film (such as the Supreme Court justices), it’s amazing that the actors recreated these people as faithfully as they did.

As the story begins, Klain is actually upset with the Gore campaign because he had been edged out as chairman by former congressman Tony Coelho, and it’s hard to tell if Klain ends up so diligently overseeing the recount effort mainly to prove Gore wrong or because he gradually realizes the horrific electoral fraud that is unfolding (Gore warmly acknowledges his debt to Klain in a phone call shortly before Gore gives up for good).

The movies does a first-class job of putting together all of the pieces of the puzzle as far as I was concerned. And there are many other terrific performances aside from Spacey: Denis Leary is hilarious at times as head non-lawyer Gore operative Michael Whouley, Ed Begley, Jr. makes the very most of his brief stint as Boies, and Tom Wilkinson did something that I didn’t think was possible, and that was generate a bit of sympathy for James Baker (John Hurt hit just the right note as Warren Christopher, a man who, sadly, didn’t quite seem to “get” everything that was going on until it was just about too late - also, the "Brooks Brothers Riot" in this movie looks like a documentary).

And Laura Dern is absolutely spooky as Katherine Harris. If she doesn’t get an Emmy (or a Cable Ace award or something), then it will be a shock.

(And by the way, here’s a moment from “Recount” recalling some epic wankery by Joe Lieberman.)

The last shot of the film before the credits roll is that of all the ballots un-recounted because the process was stopped by the Supreme Court. It’s just about too painful to contemplate.
Posted by doomsy at 1:28 PM