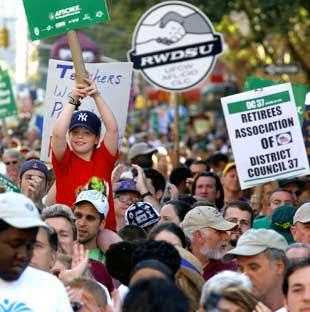 I’ve been reading about the decision by the Service Employees International Union not to endorse a particular Democratic candidate for the party’s nomination, and I keep trying to figure out how this is a positive development (for someone besides Hillary Clinton, I mean).

True, the Edwards campaign will receive the support of “hundreds of thousands of SEIU members,” as spokesman Eric Schultz pointed out, which is bound to provide a shot in the arm, as it were, in terms of money, backers, and workers doing the nuts-and-bolts leg work for the campaign (and of course Barack Obama and Clinton herself will be helped out, as well as other Democratic candidates reaping benefits of varying degrees).

But to dilute the clout of a single national endorsement for anyone dilutes the power of organized labor in general in the campaign, as far as I’m concerned.

And for a bit of a history lesson on this, I went back to this article by Ryan Lizza of The New Republic from 2003 in which the SEIU threw its support solidly behind Howard Dean (and, of course, we know how that turned out; John Kerry spent a ton of dough in Iowa, the media replayed the “Dean Scream” about a million times, Diebold and Kenneth Blackwell in Ohio did what they did best – with the help of a whole bunch of homophobic voters – and George W. Bush and Dick Cheney lived happily ever after).

And as I read this excerpt, it made me realize how much of our current debate is similar to what we were talking about four years ago, and probably a lot longer also…

Because many of its members are employed in low-wage jobs without health benefits, SEIU made it clear to every candidate seeking its endorsement that he or she had to have a comprehensive, written health care plan. An SEIU advertisement at the airport in Des Moines, Iowa, greets passengers with this message: "Running for president? Health care better be your priority." (Former Democratic presidential hopeful and U.S. House Rep Dick) Gephardt based his whole campaign strategy on this warning. Gephardt knew he could already count on the support of the industrial unions because of his long record fighting NAFTA and other trade deals. But those unions -- think Rust Belt, blue-collar workers who actually make stuff -- weren't enough to get him the AFL-CIO's endorsement. To get to the magic two-thirds majority, he needed SEIU, whose members -- think urban black and Hispanic janitors, security guards, and nurses -- aren't as affected by globalization. "They care about trade, but at the same time they don't see this dogged loyalty to Dick Gephardt because he was with us on NAFTA," says the Democratic labor consultant.

I’m not sure I agree with Lizza’s generalizations about globalization, but my point is that Dean presented a health care plan and came out against the war when the latter move was still highly unpopular. Edwards presented his health care plan first in the campaign and came out against the war before anyone else also, but I think Andy Stern’s decision to withhold an endorsement represents a “lesson learned” from Dean’s failed candidacy.

The implications of an SEIU endorsement are huge. SEIU is home to many recent Hispanic immigrants and other minorities. Its membership is 28 percent black and Latino, and it represents more immigrant workers than any other union. Coming on top of high-profile African American endorsements from the likes of Jesse Jackson Jr., SEIU's stamp of approval would immediately change the Dean campaign's image as a narrow movement of high-tech, latte-town liberals. And SEIU, which is influential in New Hampshire, the first primary state, as well as in delegate-rich California and New York, will give Dean a large ground force of experienced organizers to complement his own.

I guess the “latte-town” liberals remark is just a reminder that, after all, we’re reading from Joe Lieberman Weekly here.

And Stern doesn't just bring SEIU with him. His endorsement could be similar to Gerald McEntee's 1992 nod to Bill Clinton. McEntee, president of the American Federation of State, County, and Municipal Employees (AFSCME), spoke glowingly of Clinton at a critical moment before the primaries started in January 1992; and he also freed local AFSCME to back the Arkansas governor. The move was a severe blow to Tom Harkin, who, like Gephardt today, was a longtime labor ally with deep industrial union support. McEntee opened doors for Clinton's campaign and was seen as a kingmaker.

I’m not sure there is a direct parallel between today and some of what Lizza mentions here, but it does give an idea of how a single national endorsement could change the picture on behalf of Edwards (or Barack Obama or any other candidate in the field).

I understand that not naming a single candidate is a move by Stern not to get burned as he was four years ago, but I don’t understand how splintering the SEIU’s impact in this race can obviate anything but the Democratic coronation of HRC next year (please let me be wrong, though).
Posted by doomsy at 10:27 AM