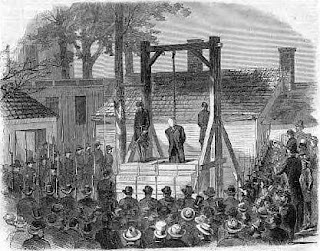 It looks like CIA director Michael V. Hayden want to “arrange a neck tie party” for that agency’s inspector general John Helgerson, as noted on the front page of the New York Times today…

The review is particularly focused on complaints that Mr. Helgerson’s office has not acted as a fair and impartial judge of agency operations but instead has begun a crusade against those who have participated in controversial detention programs.

Any move by the agency’s director to examine the work of the inspector general would be unusual, if not unprecedented, and would threaten to undermine the independence of the office, some current and former officials say.

Frederick P. Hitz, who served as C.I.A. inspector general from 1990 to 1998, said he had no first-hand information about current conflicts inside the agency. But Mr. Hitz said any move by the agency’s director to examine the work of the inspector general would “not be proper.”

And of course Hayden’s spokesman says General Mike is looking into Helgerson because he wants the IG to “do its work even better.”

The problem for Hayden, as the story notes, is that the IG is appointed by the president, so this is Dubya’s call (and does anyone seriously think he’s going to go against Hayden here?).

As you can read here, Helgerson joined the agency in 1971; as you can read here, he began his agency career as an intelligence analyst and later headed units responsible for coverage of Russia, Europe, Africa, and Latin America. He also held a number of senior management posts at CIA, including serving four years as the Agency’s Deputy Director for Intelligence. He also served as CIA’s Director of Congressional Affairs and as Deputy Inspector General.

Former CIA director George Tenet had this to say about Helgerson…

“(His) broad experience, outstanding versatility, and absolute commitment to sophisticated intelligence analysis will further enrich the remarkable group of penetrating, unorthodox thinkers who are the heart of the NIC,” Tenet said.

So what exactly is it that Helgerson supposedly did wrong?

Well, aside looking into the detention programs as noted above, it seems as if the agency’s clandestine service operators are unhappy at what they see as a string of investigations that have compromised their effectiveness…

(Hayden) has brought back two veteran agency operatives, Steven R. Kappes and Michael J. Sulick, both of whom angrily left during the tenure of Porter J. Goss, the C.I.A. director, to assume top posts at the spy agency. He also supported the president’s nomination of John A. Rizzo, a career agency lawyer and someone well-respected by covert operatives, to become the C.I.A’s general counsel.

Mr. Rizzo withdrew his nomination to the post last month in the midst of intense opposition from Senate Democrats.

“Director Hayden has done a lot of things to convince the operators that he’s looking out for them, and putting the I.G. back in its place is part of this,” said John Radsan, who worked as a C.I.A. lawyer from 2002 to 2004 and is now a professor at William Mitchell College of Law.

And while looking into this a bit more, I came across this link which provides some rather interesting speculation from the blogger cannonfire as to why Helgerson may be on the way out; namely, a possible connection between the “extraordinary rendition” flights and the drug trade. Cannonfire lists three separate flights that link CIA renditions to the movement of drugs; again, this is speculation, but I think a lot of this stuff fits together.

Could it be that Helgerson started digging into the renditions and uncovered this activity?

Would it be so surprising if he had?

And let’s not forget this administration’s predilection for dispensing with people from time to time who do their jobs too well.

Glad to see someone agrees with that a serving military officer should not head CIA. In fact, this is illegal under Title 10 of the U.S. Code.

Yes, there was an exemption built into the National Security Act of 1947 which allowed military personnel to assume the position of DCI (Director of Central Intelligence). But that position no long exists. The DCI was supposed to collate intelligence from military and non-military sources; thus, either the DCI or his assistant (but not both) could be military.

The DCI position has been abolished. The analogous position is DNI -- John Negroponte, at present. Michael Hayden is the Director of the Central Intelligence Agency, a job which falls under Title 10. He holds that position illegally.

Interesting information - you're welcome, and thanks for the comment.