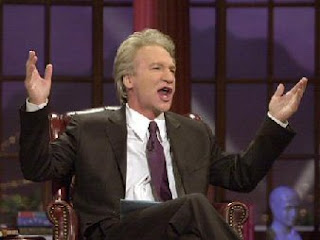 As many of us know, “Real Time with Bill Maher” returns tonight on HBO, and it will be a last-minute decision for me concerning whether or not I’ll watch. Maher is just about always entertaining, but 1) I have virtually no patience for the garbage spewing from the designated freeper wingnut stuck on the program to provide “balance,” and 2) I have even less patience for Dubya jokes, because Dubya himself is a joke, and we are the ones paying the price for his mistakes, which are legion of course, while he stumbles befuddledly (word?) through this whole “Forrest Gump Gone To Hell” nightmare of a presidency.

Concerning the show, I was provided this link from a marketing firm handling promotions from HBO that I could link to from this site, and I appreciate it. The problem, however, occurs when you play the clip, and I’ll explain as best I can.

Maher is rightly criticizing Dubya, saying that all of his father’s advisors as well as members of Congress and the Iraq Study Group have told Dubya what he should do about Iraq, but Maher says that President Brainless has found another place where he can find information to bail us out of Iraq, and that is “his ass” (not an exact transcript, but close).

The problem is that, when you play the clip, “ass” is bleeped out (presumably by MSNBC, which is, after all, the network of Tweety and Tucker Carlson – I cannot believe that HBO, the network of “The Sopranos” and “Sex In The City” would do that, especially when the show is on their network).

Well, I’m about to use a legitimate bad word myself here; that’s nonsensical corporatist bullshit!

So…we’re not even supposed to criticize President Stupid Head by saying that he pulls information out of his ass, as far as MSNBC is concerned? What’s the matter, MSNBC, do you need more proof regarding the reality of that statement?

Well, fortunately, Rolling Stone Magazine published this article by historian Sean Wilentz that provides ample evidence as to the utter atrocity that George W. Bush has become as president, and Al Neuharth of USA Today quite rightly “piles on” here.

And as long as we’re reflecting on our presidents in general this weekend, here is a post about the ones who were supposedly the worst (though, as Neuharth points out, Dubya has crashed through that ceiling, so to speak, and plummets to new depths every day).
Posted by doomsy at 12:53 PM

you're quite right... for years now, there has ceased to be anything remotely funny about george... the wholesale destruction of a country is friggin' far from a laughing matter... even if you focus solely on the person, and not the horrible consequences of his time in office, he's a pathetic man, which, in itself, obviates humor... the karma he is accumulating in staggering amounts will take him more lifetimes to work off than i care to contemplate... ah, the beauty of choice and free will... he deserves our deepest sympathy, not our ridicule...

I ended up blowing off the show due to general fatigue and my utter disgust over David Broder's recent column which I'll plan to address next week - life is too short to be utterly consumed with this stuff.