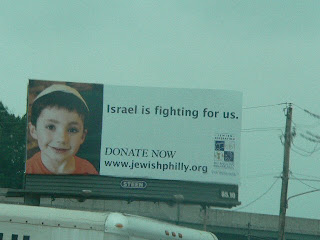 I don’t know who the blogger Harun is, but I want to thank him for jogging my memory a bit on this issue.

As I drive southbound on Route 1 in Middletown Township, PA approaching the PA Turnpike (which I do frequently), I always notice the billboard on the right side of the road that appears in the photo. As you can see, it is a photo of a young Jewish boy wearing a yarmulke with the words “Israel is fighting for us” appearing next to him.

To say that I have a problem with this is an understatement. First, it is exploitative to use a child to sell a particular ideology or political point of view. Second, it is inaccurate because I know of no American interest aside from this country’s Jewish constituency that is served in any way by the simmering hostilities between Israel and Hezbollah, and by association the nations that support Hezbollah (discounting our country’s own stake in arming Israel in the conflict, and I’ll say more about that later).

Yes, we share a similar form of government, and the right of Israel to exist should be inviolable; it is long past the point of discussing whether or not it made sense to place a nation of Jewish émigrés and refugees in the middle of Arab territory.

However, that should never make Israel immune from criticism. When they use cluster bombs in a war that are banned by the Geneva Convention, they should stand up and face international criticism for it. And speaking from experience, I can say that I’ve seen writers like Susan Abulhawa vilified enough in the Bucks County Courier Times to make me wonder why these bilious attacks can’t be replaced by what should be reasonable debate on the issues between Israel and the Palestinians (I know it’s easy for me to say that, but that alternative is preferable to bulldozing and blowing up each other).

With this in mind, I think this column by Peter Osnos of The Century Foundation makes some good points; though I definitely have a problem with Richard Cohen on other issues, it is beyond absurd to believe, as Osnos notes, that Cohen could somehow be “anti-Jewish.” And, as Osnos also points out, “Being critical of Israel is no more an expression of anti-Semitism than being critical of the tragedy of George Bush’s misbegotten war in Iraq is unpatriotic.”

I mentioned earlier how this country arms Israel, and this link provides more information. As you can see from the tales, our foreign military and direct commercial sales of weapons to Israel has been climbing steadily since 2001, while the economic support fund to offset military assistance has been steadily dropping off over the same period.

I would propose that our politicians cap the military compensation to Israel and start leveling off the amounts of offset military spending instead, particularly now at a moment when it looks like the Palestinians show some signs of getting their act together politically, possibly allowing for negotiations that would distance the Palestinians further from Iran, where Ahmadinejad continues to lose popular support. I would propose that, as I said, but I know it would be political suicide.

(Again, I’m no expert on the Middle East, but I do know that talking is preferable to trying to kill each other.)

One more thing: as Harun notes, the billboard was put up by The Jewish Group of Greater Philadelphia, and I want to address this group myself.

As Peter Osnos notes in his column (kind of dancing around the subject), Israel had a definite desire to involve this country in the current Iraq war, and at this time, I’m not sure that I’ll ever forgive them for that. While all of the intelligence was dummied up and Bushco spent over a year trying to frighten us in the run up to the war, we heard no note of caution whatsoever from your group or others that claim to support American Jews.

“Israel Fights For Us”? No, you fight for yourselves. And fortunately for you, we in this country installed a presidential administration in 2000 that has managed to give you whatever you want anytime you want. And as far as I’m concerned, you have shamefully abused that.

And aside from tearing down those billboards, I don’t know how you can make amends for it.
Posted by doomsy at 9:38 AM