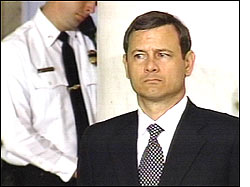 Despite the effusive praises of some turncoat Dems, Ted Kennedy deliberated thoughtfully about the nomination of John Roberts as Chief Justice of the Supreme Court last year, though he lost out in the end of course.

I would ask that you keep that in mind as I highlight the following passage from this post concerning the high court’s review of the court case over Tom DeLay’s Texas redistricting scam:

In previous cases, the high court has been reluctant to get involved in what is traditionally a political matter played out in state legislatures.

But centrist Justice Anthony Kennedy, who is expected to provide the decisive vote in these cases if they are close, has said there could be a case in which political map drawing gets out of hand, warranting the court's intervention.

Today, however, the justice appeared unpersuaded that the Texas redistricting was egregious enough for the justices to get involved.

But Kennedy said he was concerned about allegations that the Texas map-drawers violated the federal Voting Rights Act by using race to redraw some lines.

In particular, he said several times, removing 100,000 Latino voters from the 23rd District in South Texas and then making sure the district remained 50.9 percent Latino was "an affront and an insult."

But Chief Justice John Roberts asked what percentage of minority voters would be sufficient to deem the district majority minority.

"What's the magic number?" he asked.

“What’s the magic number” indeed, smart guy. The only one I know is 5, for Souter, Breyer, Ginsburg, Stevens, and Kennedy (at times), and I hope and pray they can all hang on until ’09 at the earliest until a president of at least marginal competence can nominate a successor.

Of course, the de facto leader of the court had to try and upstage Roberts.

"The only reason it was considered, let alone passed, was to help one political party get more seats than another," justices were told by Paul M. Smith, a Washington lawyer who represents the League of United Latin American Citizens, one of the groups challenging the plan.

Yes, they do (God, isn’t Scalia a “laff riot”?). But that shouldn’t be your concern. You should only be ruling on the potential (likely) illegality, not how much this case inconveniences the political party of your friends.

I guess the only reason Scalito didn’t have anything witty to say about this was because it didn’t involve strip searching young girls or joining college organizations to keep minorities off campus.

Yep, I would say that the ideological die is cast concerning the Supreme Court of Chief Justice John Roberts. Don’t question your corporate “betters” or those who have better political connections than you do.
Posted by doomsy at 7:12 AM