He Needs An Elephant's Memory 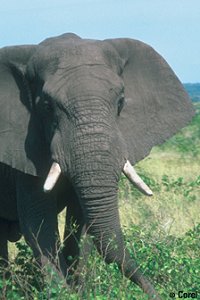 (the name of Chuck Berry’s backup/tour band in the late 60s, for any rock trivia aficionados…)

Inquirer metro columnist John Grogan’s topic today is Marianne Bessey, an animal rights activist who has been bugging the Philadelphia Zoo to release its elephants from captivity. Bessey is knowledgeable in her subject matter, having studied elephants and traveled to Zimbabwe to watch them in their habitat, as Grogan mentions.

This portion of Grogan’s column describes what’s at the basis of Bessey’s disagreement with the zoo:

Last year she began badgering zoo officials to release the four elephants to the sanctuary where they could live closer to how nature intended. So far, the idea has gone nowhere.

She's particularly frustrated over the fate of Dulary, a 42-year-old female with an injury that has kept her inside a concrete barn since August.

"It's like putting your child in a closet for the rest of their life," she said.

As her frustration grew, she posted a message earlier this month on an online chat room known as the Elephant Connection. In it, she wished that Philadelphia Zoo Director Alexander L. "Pete" Hoskins might experience what it would be like to be "kept in a concrete closet for six months to hasten [his] demise."

"My frustration just boiled over," she said.

What she didn't know was that zoo officials were monitoring the chat room (your donor dollars at work), and they filed a police complaint against her, apparently on the theory that her comments were not-quite-but-almost-sort-of a little like a death threat.

A threat, but to what?

Now, we can't have death-threatening eco-terrorists at a family attraction, right? And so the activist was banned from zoo property.

Remind me again who's acting with extreme hysteria?

The zoo files a complaint against Bessey – a lawyer who should know the consequences of threatening someone’s life, especially in written form…and yes, that is DEFINITELY what she did – but THEY are acting with extreme hysteria?

Hey, I’ve been to the Zoo and seen the elephants also. Yes, they are proud, majestic creatures. Yes, they probably should be allowed to “roam free” (which begs the question of where, exactly: Belmont Plateau? Valley Forge National Park? Citizens Bank Park for the Phillies' home opener?). But does the fact that they’re in captivity merit a death threat against the director of the Philadelphia Zoo?

Besides, suppose the zoo knew of what Bessey said but ignored it, and then she shows up one day, flips out, and starts shooting the animals and paying customers? Yes, I know that’s a very unlikely scenario, but if I were running a non-profit institution with the high profile of The Philadelphia Zoo, you’d better believe that I would be thinking about that if I heard about what Bessey said. I don’t see that “Pete” Hoskins, the Zoo’s director, was out of line at all to ban Bessey from zoo property.

And here’s another thing for Grogan to consider; he went ballistic months ago against PA State Representative Daylin Leach over some off-color comments at Leach’s blog, as we may remember. Where is the same sense of outrage over Bessey’s remarks? Go ahead and kill someone, but just don’t make juvenile comments about their sexuality, right?

Instead of looking into the “deep, knowing eyes” of the Philadelphia Zoo’s elephants, I think Grogan ought to take a deep, knowing look at himself in the mirror and see if he detects the same trunk full of hypocrisy that I do.

Update 10/06/06: In additon to this development, the Asian elephant Dulary will be moved to a sanctuary in Tennessee (can't find a link yet).

If what I wrote was a death threat, than Jonathan Swift really, really wanted people to eat babies.

Get real, please, and look at what the Zoo is doing here, which is to distract from the central issue of their abuse of elephants.

You might find it interesting that I was not named in the police report filed by the Philadelphia Zoo, nor were any of my remarks included in the report. The police report also explicitly stated that there were no threats of bodily injury or harm.

That's a fair enough comment about the police report, but the phrase "hasten his demise" is pretty clear to me. If I were running the zoo, I would "get real" and take that as a clue that I had someone on my hands who, though probably not likely to commit an act of violence - probably - would deserve being banned from the zoo just to prevent the possibility of anything happening at all.

"would deserve being banned from the zoo just to prevent the possibility of anything happening at all. "

The only thing that has any "possibility" of happening should I continue to visit the Zoo - and believe me, the Zoo knows this - is that I would continue to document the deterioration of these elephants.

What I wrote was not a threat. If it was, then the Zoo would be taking out a restraining order keeping me from 100 feet (or whatever) of Hoskins' home as well as banning me from the Zoo. Isn't it a bit odd that they haven't done anything like that?

Sigh - just my luck that I turned off comment moderation, which is silly to have for this blog anyway since I don't get that many comments...

So a court didn't issue a restraining order to keep you away from Hoskins' home - congratulations. The fact that you're pointing that out as if it were a point of pride somehow is a bit odd to me.

Here's what you should have said: "I would like to see Mr. Hoskins endure living like the elephants he claims to prize in his zoo for a little while and see how he ends up," or something like that. "Hasten his demise," "hasten his demise,"...how many times do I have to keep pointing out how inappropriate a choice of words that was (for which I see NO contrition on your part, by the way)?

But you know what? You act like it's no big deal - fine. I don't care. I've got better things to do than waste my time responding to you over this. All I know is that if you had said that about me and I were running the Philadelphia Zoo, not only would I have banned you, but I would have sought a restraining order and I probably would have considered hiring a private investigator to trail you. My only guess is that Hoskins didn't do that in part because he didn't want to give you any more publicity.

So fine - you think you're right, and I think you're wrong. Please let's just leave it at that and don't try to continue this thread, OK? And I genuinely hope that you're able to help the elephants, which, despite all of this petty business, is what all of this is really supposed to be about anyway in the end.

So, Rowan or Bessey or what ever name you're using this week - have you ever worked with elephants?

Marriane Bessey has now filed her own criminal complaint with the police for being called the "c-word" while harrassing another individual about his treatment of animals. So she should have the freedom to say and do whatever she wants but do not say anything back to her. That would be criminal.http://www.abajournal.com/weekly/article/lawyers_c-word_invective_spurs_criminal_ethics_charges_by_animal_rights_gro

Interesting that comments are now re-opened for this.

The "c-word" complaint was based on the exception to the First Amendment that does not protect "fighting words." An obscenity screamed directly at someone in physical proximity is not the same as a remark posted on an internet chat group.

For the record, I never closed comments to this post. I've sometimes taken off comment moderation, and I've ended up getting flamed when I do, so that's why it's on.