“Mad Thad” And His Latest Sad Song On The Stimulus 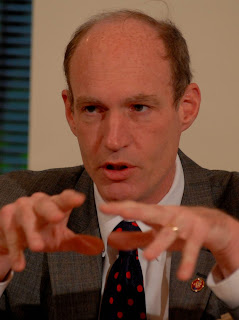 (Note: The subject of this post, Repug Thad McCotter of Michigan, apparently plays the guitar.)

Since Mr. McCotter had opposed the economic stimulus program, just what was his plan, she asked, to deal with the increasingly dire situation that she and thousands of other McCotter constituents find themselves in?

Mr. McCotter, a junior member of the House Republican leadership, ticked off some alternatives offered by Republicans and stuck to his position that the $787 billion stimulus package presented an unacceptable trade of minimal near-term benefits for future fiscal disaster.

“It won’t work,” said Mr. McCotter, 43, who worked his way up from local elected office. “If I thought it would work, I would have voted for it.”

This story was written by Carl Hulse, who, as nearly as I can tell, is a thoroughly professional reporter. However, it would have been nice if he had spelled out exactly what those “alternatives” are (or perhaps his editor could have flagged that for him and asked for further details?).

It also would have been nice if the Times had bothered to report that one of McCotter’s gripes with the stimulus was over his utterly bogus charge that it provided funding for a high-speed rail project between Las Vegas and Los Angeles (which McCotter stated in a Detroit News editorial, noted here, referring to it as the “Sin Express”).

And a cursory examination of McCotter reveals some more stunning wingnuttery, by the way (noted here)…

(McCotter) drew some heat last campaign over his vote against expanding the State Children's Health Insurance Program. Catholics United criticized him immensely for it, and he called the group "the devil" over it. No, Thad didn't back down, and urged other Republicans to hold firm with him. For, if the GOP was to be "daunted by the politics of SCHIP," it would most certainly "lose its soul."

Well, after 11 Republican Congressmen who voted against S-CHIP lost their seats in 2008, Thad was daunted by the politics of S-CHIP: Thad voted in favor of the expansion.

Does that mean that Thaddeus has lost his soul? Perhaps. But it seems to me that he's simply exposed himself for the opportunist he is. Thad knows that he is going to be challenged in 2010, and he is unwilling to give Democrats in the District this issue to run on.

And did I mention that McCotter is a real comedian (noted here)?

Also, as noted here by Wikipedia, McCotter said of the automaker loan, "We will not walk out of this room after a forced vote waving a piece of paper in our hands claiming 'fleeced in our time.'"

This Daily Kos post tells us that McCotter is rightly being targeted by DCCC robocalls reminding everyone in McCotter’s district that he opposed the stimulus (along with eleven other House Repugs – I hope the fact that Gerlach is apparently going to run for PA governor doesn’t mean that people will forget his complicity here also).

However, as the Times notes…

Bill Ballenger, the editor of Inside Michigan Politics…is skeptical that Mr. McCotter’s vote against the stimulus will be much of a political liability, particularly if the economy does not improve. “They may look like heroes a year from now,” he said.

While I believe it will take a year at a minimum to turn things around, I will do all I possibly can from now until then and beyond to ensure that McCotter and his band of idiots look not so much like heroes, but more like the clueless, obstructing lickspittles that they indeed are.

Or, maybe I could explains this in terms Thad understands, given his cute little Politico video...

Translation: "Republicans will be a totally marginalized, regional party utterly unable to do anything expect pander to racist, nativist white rage well into the next millennia."
Posted by doomsy at 6:28 PM