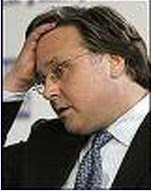 That’s gotta be the “wood” baby (and no, that isn’t a personal comment...and I also posted here).

Seriously, though, it gives me no joy whatsoever to read that Philadelphia Newspapers has filed for bankruptcy, though given our economy and the particularly sad state of the media business as a whole (with some exceptions), as well as the precarious financing of the company, it comes as no surprise.

However, it is more than a little galling to know the following about CEO Brian Tierney (here)…

…an affidavit by Richard R. Thayer, executive vice president, finance, said…Tierney "without an increase in compensation" became publisher of both papers in the fall of 2006 after the $565,000-a-year incumbent resigned. Even though Tierney in January 2008 demanded a 10% cost concession from workers, his own pay was bumped up 3% in May 2008 to $618,000. Then came the big boost around Christmas (to $858K).

Ho, ho, ho, those sound like Bill Marrazzo numbers, boys and girls (oh all right, Tierney says here that he’s giving back the raise, so that will bring him down to mortal levels at about $618 grand, I suppose; I guess that’s what you do when you get your hand caught in the proverbial cookie jar).

And Tierney was raking in his $858 grand while he was telling Mayor Nutter here to lay off 5 percent of the workforce of the city of Philadelphia across the board (of course, heaven forbid that Tierney had any particular plan to do that - and in the same column full of self-serving treacle, he was also encouraging the Toys for Tots campaign and donations to area food banks; worthy causes indeed, but their platitudes sound like garbage coming from a self-serving charlatan like Tierney).

I just don’t know what it’s going to take for Tierney and his crowd to understand that mass communications companies are public trusts, and if you fail in your mission to inform and educate (comfort the afflicted and afflict the comfortable and like that), then it doesn’t matter what your balance sheet says – you are doomed to eventually lose the asset you seem to prize most, namely your newspapers (hell, I GAVE you a plan to succeed here; try actually reading it, OK?).

In the column in which Tierney chided Nutter, the former lamented the “personal services” industry, stating that, “to profit from it seems unconscionable.”

As far as I’m concerned, given his already sweet deal without the $232K raise, that applies more to Tierney's ownership of the Inquirer and Daily News than anything else.
Posted by doomsy at 7:36 PM