“Bibi” And His Crackpot History Lesson 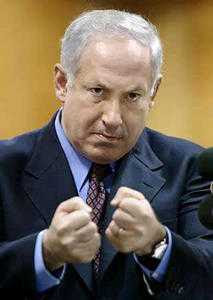 Through the looking glass we go to the Murdoch Street Journal, where opinion writer (and likely next Israeli Prime Minister) Benjamin Netanyahu tells us from here…

Imagine a siren that gives you 30 seconds to find shelter before a Kassam rocket falls from the sky and explodes, spraying its lethal shrapnel in all directions. Now imagine this happens day after day, month after month, year after year.

If you can imagine that, you can begin to understand the terror to which hundreds of thousands of Israelis have been subjected. Three years ago Israel withdrew from every square inch of Gaza. And since that withdrawal, our civilians have been targeted by more than 6,000 rockets and mortars fired from Gaza. In the face of this relentless bombardment, Israel has acted with a restraint that other countries, faced with a similar threat, would find hard to fathom. Israel's government has finally decided to respond.

The withdrawal from “every square inch of Gaza” was a commendable first step. However, this presents more information on what followed…

In August 2005 a Likud government headed by Ariel Sharon staged a unilateral Israeli pullout from Gaza, withdrawing all 8,000 settlers and destroying the houses and farms they had left behind. Hamas, the Islamic resistance movement, conducted an effective campaign to drive the Israelis out of Gaza. The withdrawal was a humiliation for the Israeli Defence Forces. To the world, Sharon presented the withdrawal from Gaza as a contribution to peace based on a two-state solution. But in the year after, another 12,000 Israelis settled on the West Bank, further reducing the scope for an independent Palestinian state. Land-grabbing and peace-making are simply incompatible. Israel had a choice and it chose land over peace.

The sticking point, as has so often been the case, has to do with trying to get the Palestinians to renounce terrorism, which is difficult when an organization like Hamas, for their many faults, appears to be the only apparatus that can provide basic services (sometimes) to a population living under duress that most of us cannot imagine.

Still, I could be somewhat sympathetic to what Netanyahu says here, until he tells us…

In that same war, Britain responded to the firing of thousands of rockets on its population with the wholesale bombing of German cities. Israel's measured response to rocket fire on its cities has come in the form of surgical strikes.

I’ll put aside the fact for now that, in this recent round of hostilities, five Israelis have died as opposed to approximately 500 Palestinians, including many, many children, and that doesn’t even take into consideration the wounded (a result of “precision strikes” against Hamas), and I’ll do that because the loss of any life is a tragedy.

Instead, I want to focus on Netanyahu’s highly objectionable comparison between what Israelis have suffered and what Great Britain suffered during World War II; as you can read here…

By the end of May 1941, over 43,000 civilians, half of them in London, had been killed by bombing and more than a million houses destroyed or damaged in London alone (the “blitz” of England began on September 7, 140 with the bombing of London which took place over 57 consecutive days).

I have not yet been able to find a reasonably precise count of Israeli casualties over the three years since the Gaza pullout, but somehow I cannot imagine that it comes close to 43,000 ("proportionality" indeed).

The struggle between militant Islam and modernity -- whether fought in Afghanistan, Iraq, India or Gaza -- will decide our common future. It is a battle we cannot afford to lose.

Spare me, “Bibi”! That hasn't worked for Bushco in years, and it won't work for you either.

These are four entirely separate circumstances, with all but one of them what I would consider to be nationalist conflicts and nothing more; the past, present and future battle for us is in Afghanistan/Pakistan, but because of Dubya’s disastrous war of choice in Iraq, that has greatly hindered our ability to prosecute it as we should.

In closing, I’d like to return to the Guardian Op-Ed for the following…

No amount of military escalation can buy Israel immunity from rocket attacks from the military wing of Hamas. Despite all the death and destruction that Israel has inflicted on them, they kept up their resistance and they kept firing their rockets. This is a movement that glorifies victimhood and martyrdom. There is simply no military solution to the conflict between the two communities. The problem with Israel's concept of security is that it denies even the most elementary security to the other community. The only way for Israel to achieve security is not through shooting but through talks with Hamas, which has repeatedly declared its readiness to negotiate a long-term ceasefire with the Jewish state within its pre-1967 borders for 20, 30, or even 50 years. Israel has rejected this offer for the same reason it spurned the Arab League peace plan of 2002, which is still on the table: it involves concessions and compromises.

And please keep in mind that these are the words of a man named Avi Shlaim who, as the Guardian tells us, “served in the Israeli army and has never questioned the state's legitimacy.”