Time For The "Duce/Dubya Duet" 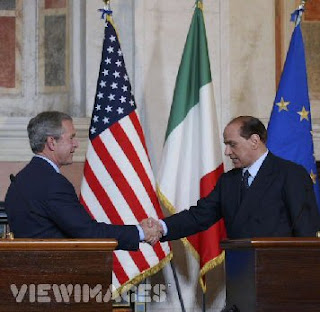 I recently came across a copy of Time Magazine’s 100 Most Influential People issue from earlier this month, and of course, the magazine is obliged to include President Highest Disapproval Rating In Gallup Poll History in the list.

For anyone unfamiliar with the concept (maybe one or two people), a peer, fan, or someone highly familiar with that individual writes a brief tribute in the magazine (I have a feeling I’ll be coming back to this issue of the magazine, since there are a couple of other inclusions worthy of commentary).

And the author of Dubya’s little paean was none other than Italy’s third-time PM, Silvio Berlusconi; his writeup appears next to a photo of Incurious George in which he, quite appropriately, is largely in the dark.

George W. Bush, 61, will be remembered as Commander in Chief, but not only for that. He was above all a President who felt the moral obligation that the leading nation of the free world must carry. My thoughts return again to that G-8 summit (in early 2001), where Italy had brought to the top of the agenda the fate of the world's poorest nations. And Bush was an early and enthusiastic supporter of our initiative to establish a fund for combating endemic illnesses.

I assume Il Duce II is referring to the Global Fund, which, as Wikipedia tells us here, was established in January 2002 to…

…dramatically increase global financing for interventions against the two pandemics (of AIDS and Tuberculosis). (Malaria is actually Endemic.)

The United States is contributing $700 million to the fund, but has decided to divert the bulk of its AIDS funding to the President's Emergency Plan for Aids Relief, PEPFAR, in order to more closely control the allocation of funds. The Bush Administration has been criticized by the Democrats for allocating funding for abstinence-only prevention programs that are not proven to effectively reduce infection rates, and for refusing to purchase cheaper generic drugs that would allow for more treatments than more expensive brand-name drugs[4].

And this post from last February (featuring a truly unfortunate choice of women’s apparel) tells us about the abstinence-only nonsense that is part and parcel of PEPFAR (and here is what was, for me, a rare highlight of Hillary Clinton’s campaign, in which she called out Dubya over it).

Nice for Berlusconi to take a break from trying to demonize gypsies and putting the army to work picking up trash (here) to fluff our outgoing preznit, isn’t it (and even nicer for Time to allow this writeup which highlights a supposed success from years ago in this blighted era as opposed to something within a more recent timeframe).

And as noted here, Dubya’s goombah is such a man of faith along with President Clueless, isn’t he (re: comparing himself to you-know-who)?
Posted by doomsy at 2:48 PM