The Fat Lady's Tuning Up, Hil 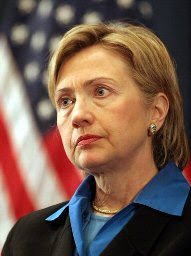 The two states must lose at least half of their 368 total delegates for holding their primaries before party rules allowed, the lawyers say in a memo sent late Tuesday to the 30 members of the party's Rules and Bylaws Committee, which plans to meet Saturday in Washington.

The committee can either allow half the number of delegates from each state into the national convention or allow the full delegations to attend, but give them each half a vote, but seating half the delegates is "as far as it legally can" go, the lawyers say, according to the AP.

Under Republican National Committee rules, no state may hold its primary before February 5. Five states - Wyoming, New Hampshire, Michigan, South Carolina, and Florida - moved their primaries ahead and were subsequently stripped of one-half of their apportioned delegates by the RNC.

Of course, as noted by kos, it has to be “all or nothing” for Hillary at this point, which isn’t going to happen.

I’m sure “no one could have predicted” that the Repugs would actually set a decent precedent on something for a change. If it’s good enough for them…
Posted by doomsy at 7:48 AM