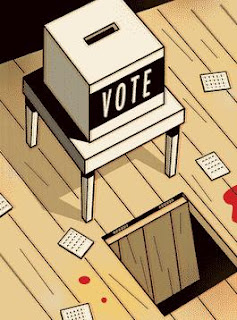 The Senate needs to work on reviving the dormant Federal Election Commission, which hasn't met all year.

That's because the FEC - which is responsible for enforcing federal election laws - has four vacancies out of six seats. While Senate Republicans and Democrats play partisan games over President Bush's nominees, the FEC can't make a quorum.

If you read this editorial in its entirety, by the way, I have a feeling that you’ll be amazed at how the Inquirer finds a way to blame Congress on the effective neutering of the FEC while offering nothing more than a love tap to President Highest Disapproval Rating In Gallup Poll History.

The Inquirer is quite correct to identify this as an issue, though, but please allow me to try and fill in some of the gaping holes of what passes for their analysis, particularly concerning this…

The withdrawal of nominee Hans von Spakovsky, whom the GOP had insisted be voted on in a package with other appointees, could clear the way for the Senate to fill the vacancies. But the White House is insisting that the Senate vote on a long list of other nominees, including those for the FEC.

Senate Majority Leader Harry Reid (D., Nev.) is right to insist that the FEC matter be settled first. It shouldn't have taken this long.

OMG, they’re giving credit to Harry Reid for something; I may faint!

And there was a reason, by the way, that the GOP (and Minority Leader Mitch McConnell in particular) insisted on a vote for von Spakovsky “in a package,” and that was because he would not have been able to survive an up-or-down vote on his own (and by the way, Mitchy, how’s that re-election bid going? Not so well? Too bad).

Why? Well, as this SourceWatch article tells us…

"(Sen. Ted) Kennedy said von Spakovsky, a Justice Department lawyer who was Republican Party chairman in Fulton County, Ga. (before going to Washington), worked toward requiring Georgia voters to have a photo identification - a requirement critics said would harm black voters. Kennedy also contended that von Spakovsky was involved in a decision that rejected a recommendation of career Justice Department lawyers in a Texas redistricting case (re: Tom DeLay’s scheme). Those lawyers had concluded that the redistricting plan violated the Voting Rights Act of 1965 because it eliminated several districts where minorities had substantial voting power and illegally diluted black and Hispanic voting power."

"In 1997, von Spakovsky wrote an article for the Georgia Public Policy Foundation, a conservative research group, that called for an aggressive campaign to 'purge' the election rolls of felons. Within months of that article’s publication, the (Voting Integrity Project, a conservative “voting rights” advocacy group) helped put von Spakovsky’s idea into action. (Former conservative activist Kevin, I believe...can't confirm) Phillips met with the company that designed the process for the removal of alleged felons from the voting rolls in Florida, a process that led, notoriously, to the mistaken disenfranchisement of thousands of voters, most of them Democratic, before the 2000 election," (Jeffrey) Toobin wrote.

"During the thirty-six-day recount in Florida, von Spakovsky worked there as a volunteer for the Bush campaign. After the Inauguration, he was hired as an attorney in the Voting Section and was soon promoted to be counsel to the Assistant Attorney General, in what is known as the 'front office' of the Civil Rights Division.

So von Spakovsky is a pro at voter disenfranchisement, which, in Bushco’s typically twisted view, made him a perfect choice for the FEC.

So how did he get onto the FEC? Why, by a recess appointment, of course, in December 2005 (SourceWatch has it as January 2006, though). And to get an idea of just how dirty this guy is and how strenuously he has been opposed, click here.

And it is important to note that one reason why it took the FEC three years to act was because it did not have a quorum of four members, with only two currently sitting – Ellen Weintraub and chairman David Mason, a Dem and Repug respectively (three must sit from either party; another Dem and former commissioner, former FEC Chairman Bob Lenhard, withdrew his name from consideration because of the delays in the confirmation process).

Bushco has also nominated Repugs Donald McGahn (a former lawyer fro Tom DeLay – nice) and Caroline Hunter to fill the vacancies on the commission. However, in the process, Chairman Mason was dumped by Dubya, presumably because he opposed “Senator Honor And Virtue” and his campaign finance flim-flam, as the Inky noted (McSame claimed that he used public money as collateral only, apparently, while he went out and raised private dough – no end to the Repugs and their gimmicks). Mason was also a friend to the netroots, which put him square in the bullseye of the Repugs as well.

Also, as noted in the “truthaboutfraud” link above, one of the earliest opponents to the von Spakofsky nomination was a certain senator from Illinois, who knows a thing or two about mobilizing voters in mass numbers (as noted here) and the importance of their right, and ours, to exercise their franchise without the cynical games conceived of and executed by von Spakovsky and others of his foul ilk.
Posted by doomsy at 2:33 PM