Be Prepared...To Hate Teh Gay In Phila., PA 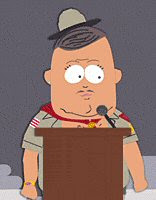 (By the way, I’ll be entering another dry posting spell shortly, probably into early next week again.)

On Monday, the Philadelphia Inquirer published this editorial from PA State Senate Repug “Gib” Armstrong concerning the fact that the Philadelphia chapter of the Boy Scouts of America is about to be evicted from its headquarters at Logan Square.

Here come the bloviation – put on your hip waders fast…

For many Pennsylvanians, it is hard to believe that the City of Brotherly Love is about to become the City That Booted the Boy Scouts.

Evict them from a building they have paid substantial sums to renovate and maintain over the years? Jeopardize the future of an organization that instills kids with character-building concepts such as honor and service?

The choice given the scouts was an impossible one: accept a local policy they cannot abide by, or pay an escalated rent they cannot afford. This unfortunate and unnecessary confrontation has already had repercussions, cutting into contributions, which in turn leads to cuts in staffing and programming and puts the participation rate at risk.

This is a clear case of a political agenda being put ahead of the interests of tens of thousands of inner-city kids.

What lesson is being taught?

Ok, that’s about all I can take on this for now – everybody OK out there? I hope you all had time to drape yourselves ahead of the onslaught of BS.

(And “political correctness”…heh, heh – I know Smerky is proud of that one. And by the way, this was a cause of our former PA House Rep. also from “back in the day,” as noted here.)

This post from last December told of how Philadelphia City Solicitor Romulo L. Diaz Jr. contacted the local chapter of the Boy Scouts of America and told the group to either renounce its policy of banning gays from the organization in order for it to remain in its headquarters near Logan Square or pay up more for its rent at market value.

Diaz has said that if the scouts did not respond by his Dec. 3 (2007) deadline - by either relenting on the policy or paying a $200,000-a-year "fair-market rent" - he would actively begin looking for a new tenant for the 79-year-old building at 22d and Winter Streets near Logan Square.

The Cradle of Liberty Council built the Beaux Arts structure in 1928 on Fairmount Park land that the city agreed to lease to it in perpetuity for a dollar a year.

So “Gib” (I wonder if he has other family members named “hoist” and “sail” – OK, too much snark…and yes, I know it’s spelled with a “j”), this isn’t a case of the Scouts “accept(ing) a local policy they cannot abide by,” it was a matter of compliance with the law. It also doesn’t have a damn thing to do with “a political agenda” or “political correctness.”

I’m not surprised, though, to see Armstrong engaging in a hissy fit here (with the Inquirer anxious to oblige him, I’m sure), seeing as how he also worked in concert with higher-education-freeper-for-hire David Horowitz here to try and ban free speech at PA’s publicly funded colleges while waxing nonsensical about the dread “liberal bias” charged by one Temple student (well moneyed to help pursue this pointless legal exercise, no doubt).

(Oh, and by the way, to take this nonsense to a new level, the Inquirer and Daily News reported that the Boy Scouts actually sued the city over this today – here’s the Daily News story. And here is a Letter To The Editor in opposition.)

And Armstrong also railed about what appears to be the sad demise of Philadelphia’s “Safe and Sound” after-school program (here’s a link). But, as noted here in an October 2007 interview with California Senator Barbara Boxer…

Where do things stand in terms of funding for after-school programs in the final agreement for fiscal year 2007 and the president's proposed funding levels for the next fiscal year?

It saddens me greatly to realize President Bush is breaking his promise to our children by consistently underfunding a program that is proven to work.

And Armstrong ends his pointless rant with the following…

Philadelphia, which has run a lot of expensive tourism ads in recent months, once again comes across as a city where common sense is too often on vacation.

The man obviously knows from whence he speaks.
Posted by doomsy at 3:19 PM