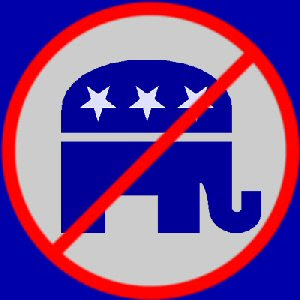 It seems that local radio personality Dom Giordano of radio station 1210 AM WPHT in Philadelphia is going to follow the typically bad advice of Flush Limbore and switch his party affiliation from Republican to Democratic so he can vote next month in the primary for Hillary Clinton, then presumably change his affiliation back to Republican so he can vote for "Straight Talk" McCain in the fall (noted here). And of course, he's telling his hammerheaded listeners to do the same thing.

If someone wanted to give the enema to Philadelphia's conservative body politic that it so sorely deserves, Giordano's mouth might be the place they would stick the tube.

How many levels of stupid? Well, think about the election officials hopelessly overburdened with the attendant paperwork to satisfy the whims of these troglodytes, and then think about any mixups that would occur in the general election if these Republican/Democrat/Republicans weren't re-registered in time. And think about the screaming from these characters if they weren't accommodated (it would serve them right, actually).

Also, here's something to consider.

Yes, it's true that Markos at The Daily Kos encouraged Democrats in Michigan to vote for Willard Mitt Romney in an effort to derail "Senator Honor And Virtue" as much as possible (here). However, Michigan has an open primary, so such voting was totally within the rules. Pennsylvania does not; if it did, I wouldn't care if Giordano or any of his minions chose to vote for Hillary Clinton, Ralph Nader, Bill Kristol, Dick Vitale - anybody the hell they wanted.

Besides, which political party out there is the one always screaming about voter fraud? Well, then, what do you call this?

This is a desperate act by the water carriers for a morally and intellectually bankrupt political movement, one that wrested the keys to Dad's roadster, as it were, in December 2000 and subsequently drove it right off a cliff (9//11, Iraq war, Katrina, corruption, economy in shambles - you know the sad litany as well as I do). And this November, it will finally go splat once and for all.
Posted by doomsy at 6:02 PM


Shouldn't that be; 'switch from REPUBLICAN to DEMOCRAT' so he can vote for Hillary? :-)

GAAH! Thanks for catching my screwup...