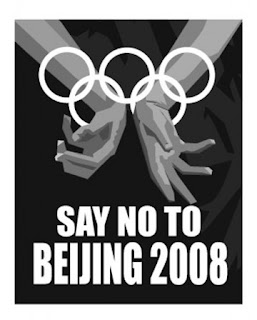 My hero for the moment is U.S. House Rep Frank Wolf (amazing that he’s an R from Virginia, but there you are) based on this story (he’s opposed to Dubya attending the Olympic games in Beijing this August)…

…(Wolf) cited concerns about China's record on human rights during a congressional hearing on Thursday and said Bush's presence would be akin to President Franklin D. Roosevelt sitting in the same stands as Germany's Adolf Hitler in 1936.

"Ronald Reagan would have never gone to the (Beijing) Olympics. I guarantee you that. Never gone," said Wolf, a member of the House Appropriations Committee.

Wolf, who co-chairs a congressional caucus on Sudan, blames China for not using its close ties with the Sudanese government to end the violence in Darfur. Wolf also charges that China has sold weapons to U.S. enemies, jailed countless political prisoners and tried to spy on America's high-tech industry, including companies in his district.

By the way, it should be noted that The Sainted Ronnie R wasn’t faced with a dilemma like this during his presidency: the Summer Olympics were held in Los Angeles in 1984 and Seoul, South Korea in 1988, and the Winter Olympics were held in Sarajevo in 1984 (which, sadly enough, ended up decimated by the war in Yugoslavia later) and Calgary in 1988.

Also, filmmaker Steven Spielberg backed out of working as an “artistic adviser” to the opening and closing ceremonies of the games last month in protest because he felt China wasn’t doing enough to try and resolve the crisis in Darfur (here, and I agree).

And concerning alleged human rights violations within China, I had to laugh at this quote from Foreign Minister Yang Jiechi in response to an inquiry from British Foreign Secretary David Milband (here)…

"Ask ten people from the street to face public security officers and ask them to say 'human rights are more important than the Olympics' ten times, or even a hundred times, and I will see which security officer will put him in jail," Mr Yang said. "If they've been talking for too long and get tired, the officer will offer him a cup of tea."

Sure he will, accompanied by manacles and a truncheon against the side of the head I’m sure, before this person utterly “disappears” (and if you think I’m exaggerating, read about Hu Jia, Yang Chunlin and Ye Guozhu from here…we should press China to free these people, assuming this country under Bushco still cared about human rights and what should be, after all, the true spirit of the Games).

And by the way, do I even need to point out that Dubya has no intention of blowing off the Chinese (of course, not that we could afford to do that anyway, lest they decide to start liquidating our debt).
Posted by doomsy at 2:52 PM